Maverick hat not awarded during bounty

This question is intertwined with an earlier one I posted

I answered a -3 question on January 1 and on the same day I placed a bounty on it. The bounty, which I cannot award to myself, is 100 points because users who have posted an answer cannot offer a bounty for less than that amount. My answer has earned +9, a new answer has earned +4 but it was posted 3 January, I cannot tell if he has won the Maverick hat because I think he has opted out of Winter bash (stunned silence). 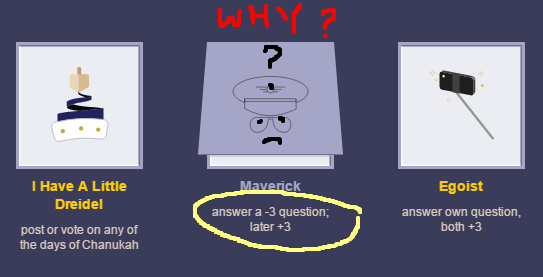 I still haven't got the hat. (This is the second time it has earned +3 but after five hours it earned a negative vote and it was back to -2.)

Obviously I'm missing something here, but I can't think what it is. BTW I did not edit the original question, the upvotes and downvotes it has received belong to the OP they have nothing to do with me. Personally, I quite like the question but it has attracted a total of 7 downvotes and 10 upvotes so far.

Can someone explain what I must have done wrong? Did I break the rules? Or is this a bug in the system?

This is working by-design.

If you've answered the question, your vote doesn't count towards the total score for the hat. Many of the hats exclude self-actions, for example we exclude self-answers on the Snaphat. In order for you to get the hat for this post, it would need to get the 3+ score without a vote by you.

Not the answer you're looking for? Browse other questions tagged discussion bounties winter-bash winter-bash-2016 .

588
How does the bounty system work?
594
Exit strategies for "chameleon questions"
28
Why aren't bounties refunded if they are not awarded?
827
Net Neutrality and Stack Overflow / Stack Exchange
203
Winter Bash 2018 Hat list
2482
Firing mods and forced relicensing: is Stack Exchange still interested in cooperating with the community?
661
Monica's situation continues unresolved. Is SE hoping the problem just goes away?
2224
Stack Overflow is doing me ongoing harm; it's time to fix it!
744
New Feature: Table Support