Users with <15 rep cannot see moderator responses to their flags

Users with <15 rep can flag their own posts, but when these flags are handled by moderators, it seems that they do not have access through the GUI to the moderator's response.

That is, instead of seeing a link with "1 helpful flag" on their profiles, they get plain text indicating how close they are to hitting 15 rep: 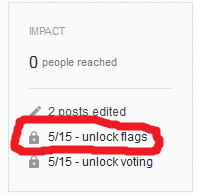 They can access the flag summary page if they have the direct URL (/users/flag-summary/#####), but otherwise not until they get to 15 rep.

I'd suggest that any user who receives some kind of moderator response to a flag should be able to view it easily and immediately. I see two possibilities; there may be more:

I don't know if we can reasonably expect a new user to even notice that link on the profile, though I agree it should be there for anybody who has raised flags. But I agree with Kendra in a comment that using inbox notifications and then stopping when the user can raise other flags would be confusing.

Fortunately, we're talking about users who can only flag stuff on their own questions. So instead of an inbox notification, let's find a way to place a clue on that page itself, like we do with duplicate proposals. With this approach we can both alert the user and teach about flag responses. Consider something like this: 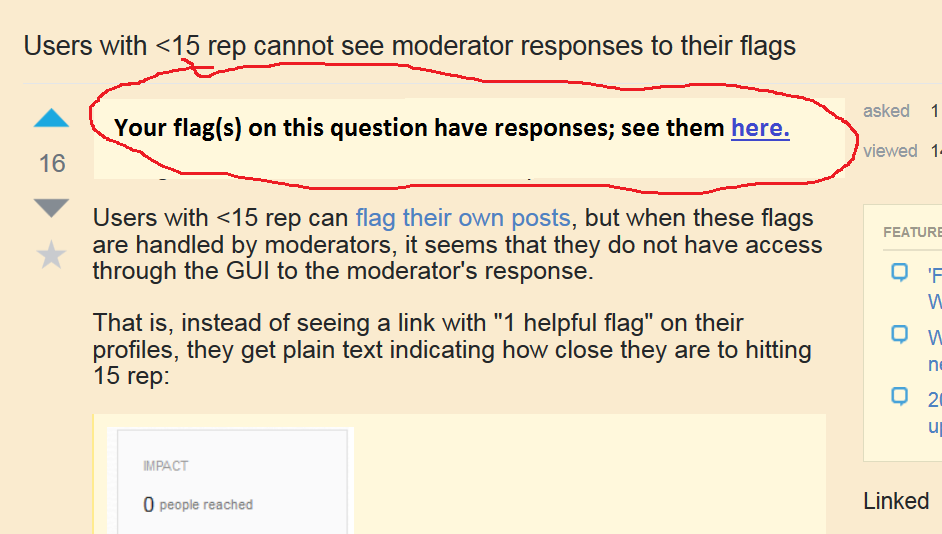 This notice only appears when (a) the user has cast flags here and (b) there's something to see (a response). The link goes to the flag-responses page.

I agree with this suggestion.

I rarely flag and '< 15' will never apply to me but I still have to remember if/when/where I flagged and then dig through the site's user profile to see if/how it was resolved.

Since, so far, I always accept the outcome a simple single notification after it's resolved would be helpful.

More? - One memorable example of when this would be most helpful:

In one instance a site's moderator closed a question as a dupe of another - where the problem lay was that they had reversed which was a dupe of the other and then went offline.

I raised a flag (after writing them a comment, and waiting) explaining that people were waiting to answer the question rather than post answers to the question that was likely to be closed - and the correct location, being closed as a dupe, wouldn't accept answers since it was closed.

It took a couple of hours for someone with the ability to override the action to become available and deal with the flag. They reversed the duplication link (making the newer question a duplicate of the older one) and migrated the answers from the new question to the old question - Applause.

A notification would have been great since it would have saved me going back to the site and locating the flag to see the outcome. I don't know if a clue on the page would have been as enlightening since if I went there I'd see the deed was done (assuming that they agreed with the flag). Once it's fixed (or not) I don't need to know again (but could scroll my Notification History if I was keen to) and a 'disolving pop-up' on the webpage is sometimes missed when mobile browsing (too quick to hide, and might be offscreen).

It's good to get feedback about your feedback, to know when you're helping (or should be studying the help more carefully). I've had to mention the upper right menu and how the exact rules can differ in word or practice to a few people on several occasions.

Anything that can smooth things and make everything easier and approachable/welcoming is useful - access to the results of one's own flags seems a given (and an oversight), especially if it's rejected and suggests to read something ...

65
How do I get attention for old, unfixed bug reports and feature requests without official responses here on Meta?
24
Should 1-reputation users be able to flag their own posts?
10
Let the user access their flag history when they are suspended

169
Add escalation system to chat flags
28
All users should see their flag history as soon as they make a flag
195
Allow moderators to reply to a flag
166
Allow recovery from flag hellban
61
If I have flagged a post, show me a "flags" link in my profile
422
Can a machine be taught to flag spam automatically?