Not sure if status-bydesign or not:

When reviewing an already-raised flag (in this case, Rude/Abusive), I found the option I had selected greyed out (as expected), but also the spam option greyed out as well. Is that supposed to be the case? 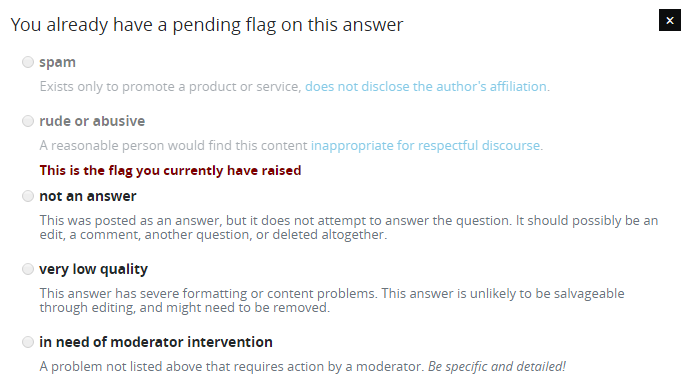 "Spam" and "Rude/Abusive" flags are classified as high-priority, and get special treatment, i.e. they have a blinking marquee not really so mods pay attention to them ASAP.

The only disadvantage to this is sometimes mods decline spam flags on rude posts, but that has a good reason; it's because an abusive post, for instance gibberish, confuses the spam filters if deleted as spam.

Not the answer you're looking for? Browse other questions tagged bug flags user-interface .

297
What are the “spam” and “rude or abusive” (offensive) flags, and how do they work?
10
Minor “you have already raised this type of flag” bug?
298
Add optional box for spam flags letting you say why you think it's spam
53
Terminate the editing grace period when a post receives a flag
412
Can a machine be taught to flag spam automatically?
28
Can we have an auto-flag for posts deleted as spam, rude or abusive?
169
A machine can flag spam automatically. Can it do better?