Today we all learned that, after tomorrow (also known as "today" in UTC+ parts of the world), Sklivvz will no longer be a Stack Overflow employee. This marks the end of a nearly four-year run as a software engineer here, so I think it's worth taking a moment to look back on his time here with the company, as punishment for his sins as a way of bidding fond farewell...

Sklivvz joined us here after a solid tenure as both a long-time Stack Overflow user and founding moderator on Skeptics (he'll retain that status after leaving). His primary focus was on work that affected the Q&A sites.

Sklivvz was active in many different areas during his time here: continuing to moderate Skeptics, helping to guide new users and moderators, traveling the world to share what he'd learned with others face-to-face, occasionally reminding us that there are other countries besides the USA... Among the hundreds of bugs and features that Sklivvz worked on here (including many things most of us probably use daily, like the Help Center and mobile web theme), there are two that I think deserve special recognition:

I want to highlight the work on both of these, not just because neither will come to fruition until long after Sklivvz is gone, but also because of how the work itself was done: careful analysis of the problem, followed by discussion of possible solutions. Even when the project was something I fully intended to hate (new nav...), the attention to detail that Sklivvz put into researching the problem and defining the goals before venturing to suggest a solution invariably won me over; his work - whether contributing his own ideas or critiquing others' - invariably held to an uncommon sort of persistent honesty that I'll deeply miss.

Please join me in thanking Sklivvz for the work he's done here, and wishing him well in his future endeavors!

Thanks, Josh and Tim, and the community whole. These have been four fantastic years!

I've written a little something to explain my thoughts more fully, but TLDR: thanks, you have made me a better person.

Fun fact, Sklivvz is the second Stack Overflow employee to give a talk to many very curious and inquisitive developers in The Philippines :) Here's a great shot of him doing it: 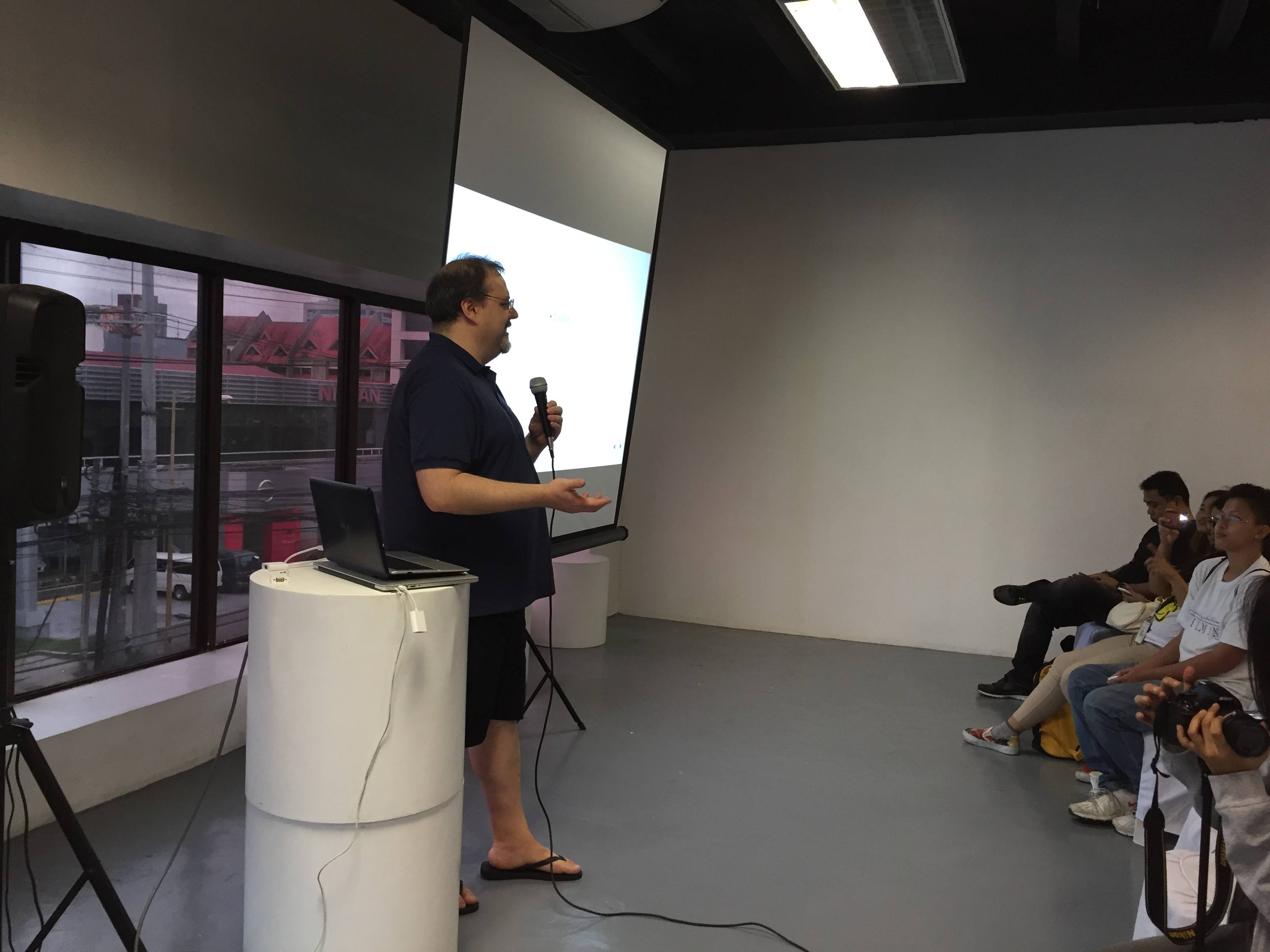 The talk was all about performance, and how Stack Overflow manages to load in an amazingly short amount of time, and he completely captivated the room of 100 something people during the entirety of a talk that went over time for about 40 minutes. There were no less than 30 really good questions after he wrapped up. If you've ever given talks like that, you probably realize that's rather uncommon.

We love pictures in The Philippines, I'm not sure if he was ready to be in over 100 of them before heading out.

Here he is with one of our top users from Manila, Jon, along with me: 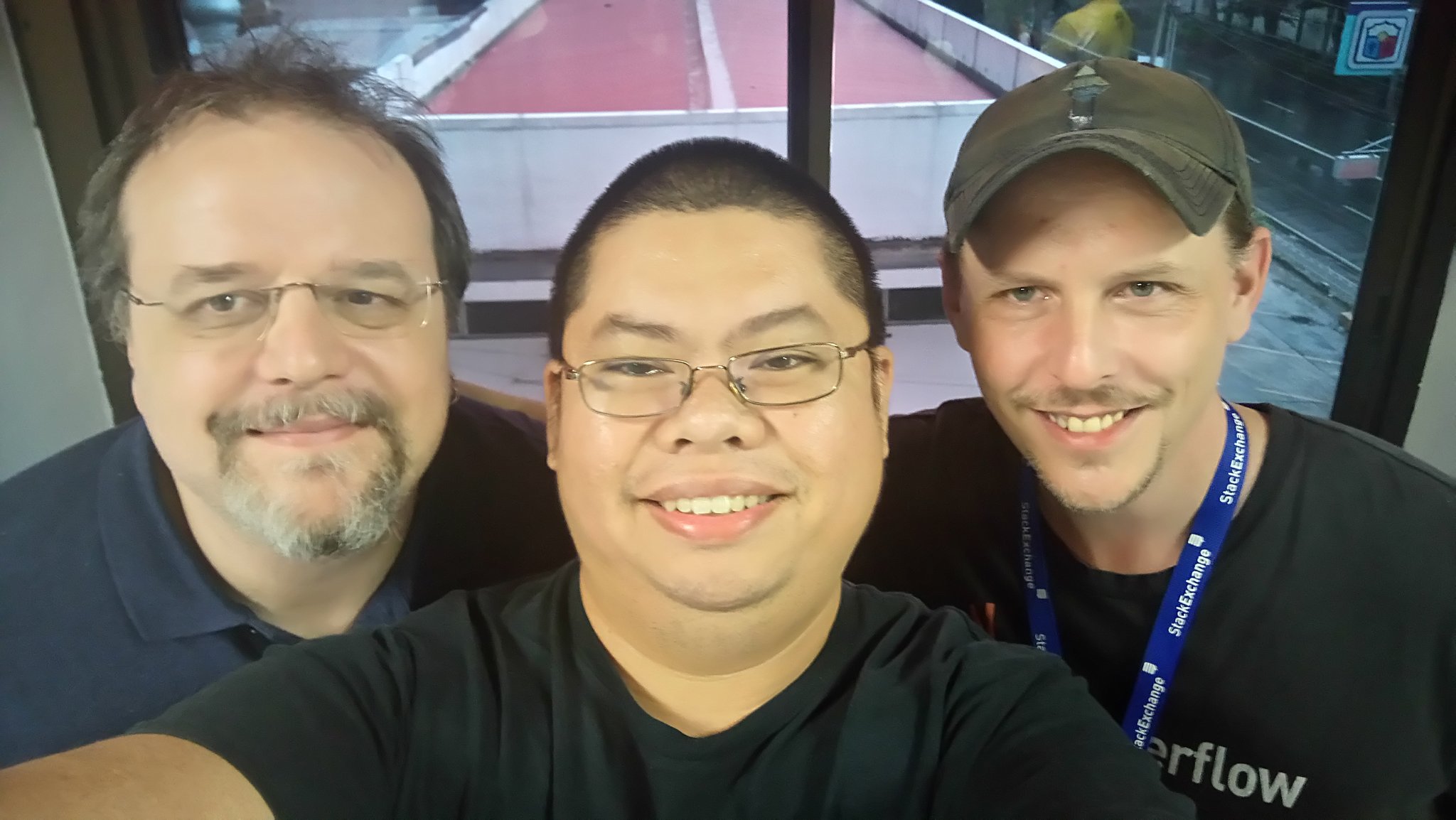 Something that he and I both love to do is actually get out there and spend time in the real world with the people that use and care about what you build. While I'm sure that I'll run into Sklivvz 'on the road', I'm going to make sure that we keep that tradition going in hopes that we one day actually meet a robot.

Sklivvz also has quite the appetite for S.E. Asian cuisine, so we hung out at my place the day he was flying back and cooked some Philippine comfort food known as crispy pata - a pork leg and trotter braised until it falls off the bone, with the cap made nice and crispy: 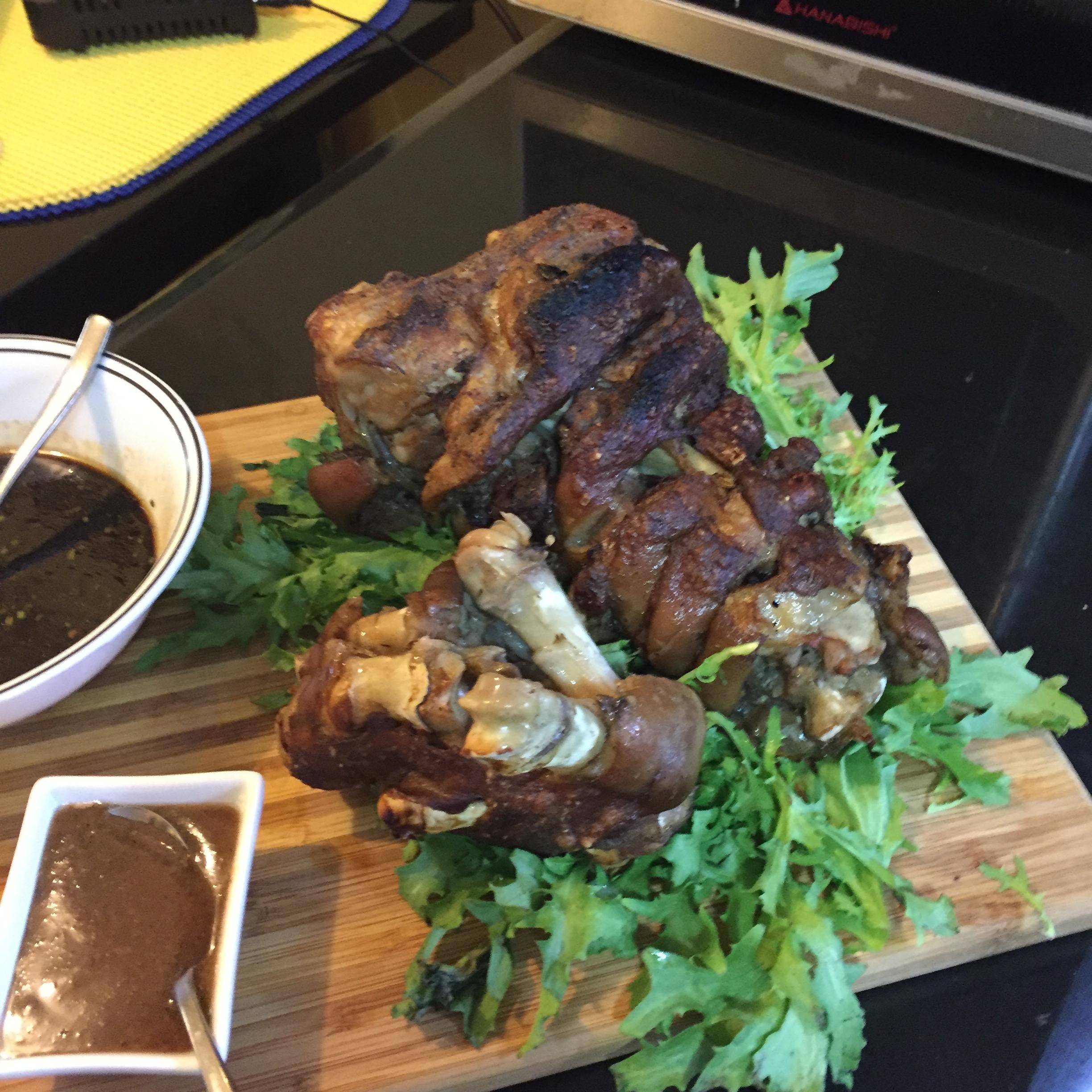 Fun fact: Sklivvz can drink 10 shots of espresso in the space of approximately three hours. I know this because that's how many I made for him so he could fight jet lag long enough to get on his flight out.

Gonna miss you Marco, but I'm sure I'll see you around :)

1573
Thank you, Shog9
258
Let’s improve our site navigation
206
Open hostility from SE staff towards the community - trying to understand it
16
How can we make the voter "call to action" ads more universal?

541
Recent Reputation History Changes
2805
A Terms of Service update restricting companies that scrape your profile information without your permission
365
Let's take a look at the interaction between staff and the "power users" of the network
2528
Firing mods and forced relicensing: is Stack Exchange still interested in cooperating with the community?
1005
Firing Community Managers: Stack Exchange is not interested in cooperating with the community, is it?
576
Change in roles for Jon Ericson (leaving SE)
584
We're switching to CommonMark
501
Thank you, Geoff
430
Update on the ongoing DDoS attacks and blocking Tor exit nodes