It's been fairly well established at this point that the Hot Network Questions mechanism can sometimes cause a question to blow up out of control (basically because they cause an influx of visitors who have low reputation, and these users can perform actions that increase hotness, such as upvoting and answering, but not actions that decrease hotness, such as downvoting and closevoting). If the question is good and the answers are good, this isn't a problem. If, however, the question is dubious (ontopic but not really the sort of question you'd prefer), and the answers are trivial, it can cause serious problems.

Most approaches I've seen suggested to the issue are based on disallowing drive-by votes. However, an alternative approach would be to automatically detect questions which are unsuitable for the list, and leave them off. There's probably no way to automatically find all unsuitable questions, but there's a relatively simple test that can be used to find a subset of them.

Here's a good example of the sort of question which will a) inevitably hit Hot Network Questions, despite everyone's efforts, and b) can easily be recognised as being inappropriate by a computer.

From the human point of view, the most obvious property of the question is that it's trivial – really trivial; if you know how to program, you can most likely write a decent, competitive answer to the question in ten seconds (and lots of people have). (There have been at least two attempts to close the question based on dislike of it, but none of the close reasons fit, so it's been allowed to stay open.) Of course, this triviality means that it's inevitably going to attract a lot of answers, and shoot up the Hot Network Questions list as a result, where it can attract even more.

From the computer point of view, we merely have to look at some of the most basic information about the question: it has (as of the time of writing) 33 upvotes, 32 downvotes, and 57 answers. That's a pretty bizarre range of statistics; and because the question was on Hot Network Questions for a quite a while, it indicates that the site's community had a very negative view of the question (because downvotes must have come from people with 125 rep, but anyone with an association bonus can cast an upvote, and we can assume a number of upvotes came in "from outside"). It's unsurprising, though, that really trivial questions will tend to get more answers than upvotes. Looking at things in reverse, if a question has more answers than upvotes, it means that some people put in the effort to answer the question, without wishing to put in the much smaller effort to upvote the question, and thus there's hard evidence that some number of people decided that it wasn't a very good question.

The question I linked might be an extreme example, but lesser examples play out on PPCG every few days, and I understand that similar issues happen on other sites too. As such, my proposal is to exclude a question from Hot Network Questions if there are more answers to the question, than net votes on the question itself. (The answer scores are irrelevant here.) Using upvotes on the question, rather than net votes, would also work and be even more conservative against false positives; however, net votes are probably more appropriate (a downvote also sends a strong signal that a question is unwelcome!), and I also understand that they're much more efficient to calculate (an upvote/downvote count takes noticeable time, but "number of answers" and "net votes" are shown pretty much everywhere in the site's interface). This check is unlikely to have false positives, and would catch a reasonable proportion (based on my own subjective judgements about which questions are reasonable for the sidebar, about half) of the PPCG questions which end up in the sidebar but really don't belong there.

I wonder if that 'hotness' mechanism is that good after all. At the moment of writing I am presented this question as hot question. In my opinion it's definitely not hot. It has 1 upvote and 1 answer that is also upvoted. I suspect but can't prove it that asker and answerer upvoted each other. Furthermore the question is trivial and solllicits for information that can be found all over the internet. I believe there's another factor that inflates the importance of questions: reciprocal voting also known as 'the old boys network'. It's particularly strong on certain SE network sites. On such sites mediocre questions and evenmore mediocre answers on said questions receive roughly the same (inflated) number of upvotes. 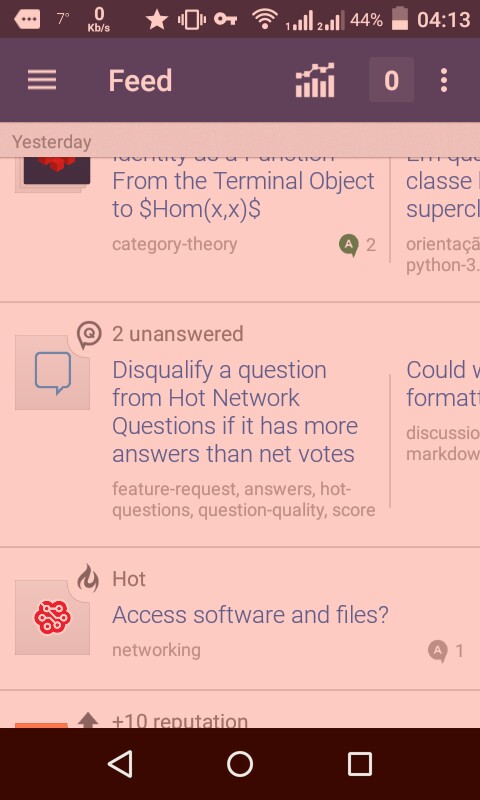 Not the answer you're looking for? Browse other questions tagged feature-request answers hot-questions question-quality score .

208
What formula should be used to determine "hot" questions?
156
Prevent questions on the Hot List from being upvoted by casual visitors (only rep is from association bonus)
111
What is the Goal of "Hot Network Questions"?
119
What are the criteria for questions to be selected for Hot Network Questions?

993
Show all of my question/answers to me even if they are deleted
1102
How does accepting an answer work?
1495
Fastest Gun in the West Problem
208
What formula should be used to determine "hot" questions?
119
What are the criteria for questions to be selected for Hot Network Questions?
1250
Don't throw away all votes when a user is deleted
546
How to avoid "Hot Network Questions" on the sidebar
117
At smaller sites, penalize hot questions having 3-4 close votes
380
Updating the Hot Network Questions List - now with a bit more network and a little less "hotness"!