Can we change the way the badge progress for the asking days badges is displayed?

Currently, the badge progress for the Curious, Inquisitive and Socratic badges looks like this: 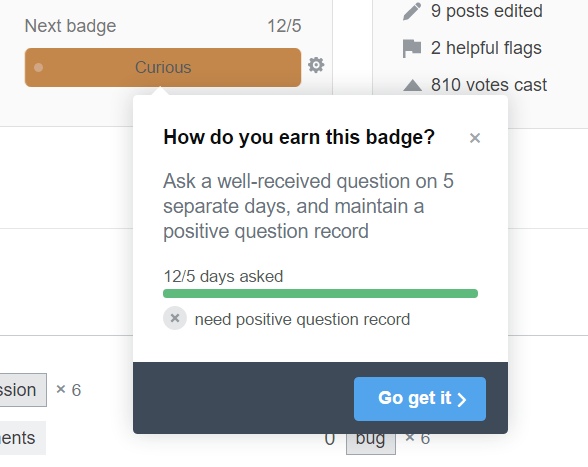 I also think that the badge progress without clicking on the button should show the question record instead of the days asked when the user has asked a well-received question on more days than the badge requires (otherwise still show the days asked, for example if a user has asked a well-received question on four separate days the Curious badge progress should continue showing 4/5). This is because I think that it looks weird seeing a 12/5 progress (and I'm not the only one), and it would make more sense seeing for example 0.4/0.5. Note that a similar feature is already implemented for the Elecorate badge (see screenshots of my badge progress and Jon Skeet's badge progress).

In case the above wasn't really clear, I've made a picture in Paint illustrating my feature request: 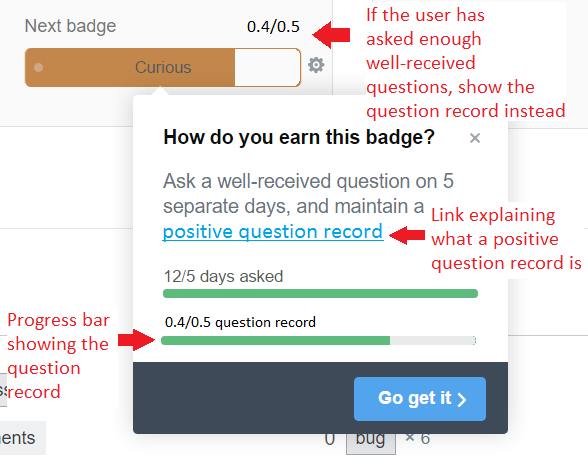 Note that the picture is just supposed to illustrate the main ideas, so it's totally OK to me if the moderators decide to design it a little bit differently.

823
What are the badges I can earn on each site, and what are the exact criteria for earning each badge?
418
Add an "I don't understand" option for review audits
174
Asking days badges
79
Misleading description of new Curious badge