Dear Stack Exchange: "New" is not a version

As time goes on and new "new" features continue to be released, it becomes increasingly difficult:

This is because "new" is relative, and as new becomes old the word "new" in posts doesn't magically change with it.

Can we please start referring to major new features with non-relative terms? It doesn't matter what it is, as long as it keeps tags, discussions, and searches clear and relevant in the long run. One of the major philosophies here is creating content that stays relevant in the face of time, and I don't think announcements about site features should be an exception.

Here are some ideas to get a conversation started:

Anything, really, but you can't keep just calling things "new" with no qualifiers, or it's going to get messier. The next "new nav" or "new top bar" or "new whatever" is only going to make it more confusing, now's a good time to start adding some clarity.

I'll close with the similar questions to the right of this post as I type it, for reflection (see also): 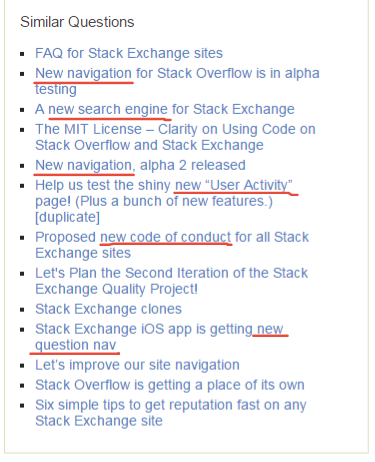 Nothing is new forever.

In our defense, who actually thought this juggernaut was gonna make it through 5 top-bar designs? I figured it'd be like 3, 4 at the most, before the whole thing got sold to some holding company and all navigation removed to make room for ads.

But, here we are. With not just 6+ years of discussion and documentation for 5 different top-bars, but 6+ years of complaints about 5 different top-bars, each predicting with surety that the world was ending and this was probably the final gasp before everything got sold off to some holding company and all navigation removed to make room for ads, followed by disease, pestilence and probably hoards of zombies walking the earth too.

All in all... I gotta say, I'm pleasantly surprised. In fact, I'm gonna go pour myself a cup of Jim Beam Bonded Bourbon to celebrate. You should too - let's face it, this falls into the category of "A Good Problem to Have", and Lord knows we have enough of the other sort of problems in These Dark Times. Heck, there are probably hoards of zombies right outside your door as I type this; drink fast and enjoy this problem while you still can.

That said... It is still a problem. And you've even gone to the trouble of thinking up some solutions, so... Let's discuss 'em, in reverse order:

Not the answer you're looking for? Browse other questions tagged discussion announcements .

199
The new top bar is out on meta. Consider it a beta
258
Let’s improve our site navigation
127
Feedback request: New top bar and MultiCollider redesign
250
New navigation for Stack Overflow is in alpha testing
86
Improving our navigation, the next iteration

1844
Could we please be a bit nicer to new users?
537
The MIT License – Clarity on Using Code on Stack Overflow and Stack Exchange
461
Network-wide HTTPS: It's time
2510
Firing mods and forced relicensing: is Stack Exchange still interested in cooperating with the community?
720
Dear Stack Exchange: a statement and a letter from your moderators
2266
Stack Overflow is doing me ongoing harm; it's time to fix it!
986
Firing Community Managers: Stack Exchange is not interested in cooperating with the community, is it?
554
The company’s commitment to rebuilding the relationship with you, our community