Close the loop on "Too Broad"; make the close reason's actual intent reflected in its message

As inspired by this particular answer by Shog9, I'm calling for a change in wording to the "Too Broad" close reason.

This invites misinterpretations that can lock down on-topic questions, or label questions which really need more edit love than close votes as "undesirable". In effect, the wording can lead one to think that a long yet objective and on-topic question should be closed as "too broad", because it's long.

Let's be explicit about why a question should be closed as "too broad".

As a reference, some things as pointed out by Shog9 indicate why the close reason exists at all:

To that end, we should change the wording to reflect this intent, with the main themes being more than one question asked and questions which lack specificity. I'm no wordsmith, but here's what I came up with:

My personal thought is "few paragraphs" is ambiguous because "few" is ambiguous" But, my hope is that this at least attempts to address some confusion about when to use this close reason and why.

The description of the "Too Broad" close reason has been changed. This is the new text:

Please edit the question to limit it to a specific problem with enough detail to identify an adequate answer. Avoid asking multiple distinct questions at once. See the How to Ask page for help clarifying this question.

Changing the message could help

I support the changing of the text in the Too Broad message.

I have had a very similar discussion to this before. Make it easier to close job shop "gimme teh codez" questions. The underlying idea was to make the close reason more straightforward with what it was being used for, as you have suggested here. However, the problem being solved was slightly different so the answers on that post do not particularly map to only changing the text.

I would suggest a change to the text as follows

Your question would receive too many long answers, would require users to create the entire design and implementation, or would require a tutorial. Please add more detail to narrow the answer set or to isolate an issue that can be answered uniquely in the character limit (30,000).

It could also cause damage or not address the underlying problem

However, even with changed text, this idea in general is perhaps a moot point. Both Brad Larson and Shog9 weighed in essentially making the argument that changing the text will not significantly address the problem.

Brad Larson suggested that perhaps instead of addressing closure from a close vote perspective, down votes could be used as an additional metric to close questions. He posited

What if we refocused close votes on the old definition of off topic (subject matter fit), and let votes take care of the rest?

Shog9's reasoning was similarly focused away from closure, and he explains very well why changing the close reason text can be a double edged sword

At every turn, attempts to solve this problem have resulted in useful questions being closed without actually doing anything for the problem of obscure one-off requirement-dumps. The problem is in the nature of what gets closed: boring, obscure questions tend to be ignored unless they're overtly offensive or blatantly off-topic, so the questions that enough folks actually view to close tend to be those that... aren't as useless as they first appear. Turns out finding drugs that kill cancer isn't hard; lots of things kill cancer. Drugs that find and kill only cancer are considerably harder...

In light of this, perhaps different approaches are necessary.

I agree that adding some clarification in the wording might help - if you can get new users to read it. Perhaps it's time for SO to provide more guidance to new users? We tell them "too broad" or "not on topic" without really providing an alternate recommendation. There have been meta discussions on the appropriateness of tutorials or write-ups on Meta before, and there is external discussion and frustration about the scope of SO as well (presumably from people who haven't taken time to get past the initial SO learning curve).

I think some more direct user guidance when closing questions would help focus or prevent too broad questions as much or more than updating the wording. Or at least stop them from asking "Is my question really too broad?"

Putting links to tag wikis in the closed banner

I've been on SO for years [1] and didn't know they existed until I stumbled on them through a Meta question yesterday (and asked a separate question on publicizing tag wikis better - their general neglect also been discussed before). The first comment was to have a new close reason: "Answered in tag wiki". I realize not all tag wikis populated or well curated, but some of the more common ones (e.g. the javascript tag wiki) are overflowing with useful external links for beginners.

Adding some "beginner" links to the Ask Question page

And remove them after reaching a rep cap, either overall or in a given topic. Possibly linked to tags wikis as well. 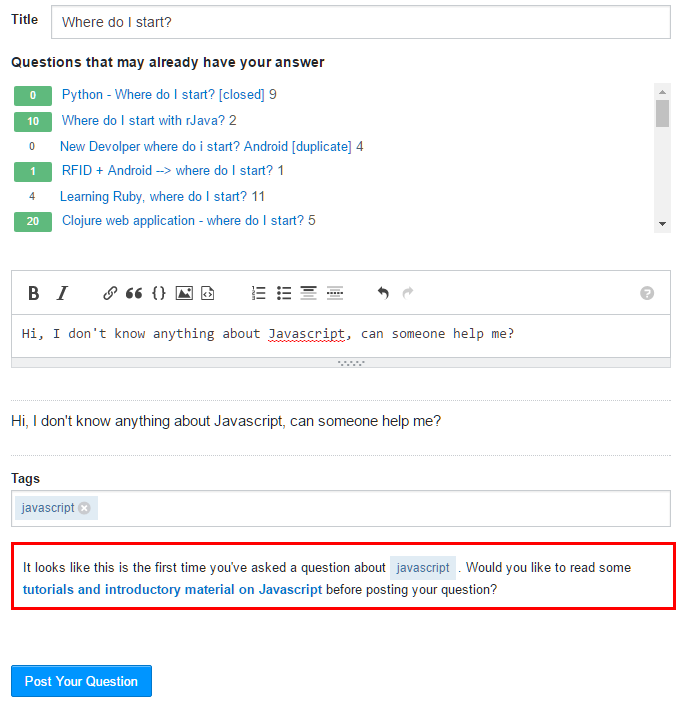 Again, perhaps in the close banner, or in the Ask Question page. Yes, we talk about what's appropriate in the on topic help page, which clarifies a lot of things - how many new users who are after a quick solution are really going to read 2 pages of community guidelines before posting though? Not to encourage alienating new users, but sometimes you just have to be blunt to get the point across. 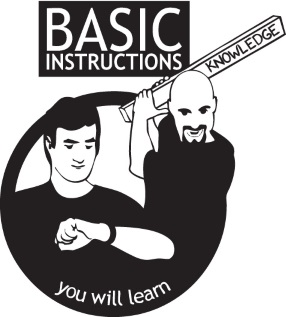 (from the web comic Basic Instructions)

[1] SO has the interesting problem of being at the top of search results for most beginner questions that really are quite broad, without wanting to provide broad answers. I for one found SO by Googling broad topics, and realizing what a great resource it was, took the effort to learn about the culture and preferred usage - many people do not. I have used SO for years to find detailed information, but never realized there was any introductory content for subject beginners.

Not the answer you're looking for? Browse other questions tagged feature-request status-completed close-reasons too-broad .

86
Changing the question reopening experience
22
Question Close Updates
81
What features did the Community Team discuss, have implemented, or have denied last month?
30
The newer close reasons don't account for questions that are too general and require lengthy answers
21
Explicitly disadvise multiple questions per question in help/dont-ask
10
Please update the description of "too broad" in the help centre
7
App's "Too Broad" close reason should be updated to reflect the new description

335
Distinguish close votes by reason
185
Every "close" has its thorn: replace "close" with "on hold" for the first five days
258
Closing changes: [on hold], unclear, too broad, opinion-based, off-topic reasons, bye-bye to Too Localized
418
Add an "I don't understand" option for review audits
437
Should Stack Exchange in general be awarding "A"s for Effort?
0
Add something about "minimal effort" questions to the "Too broad" close reason
10
Please update the description of "too broad" in the help centre
580
We're switching to CommonMark