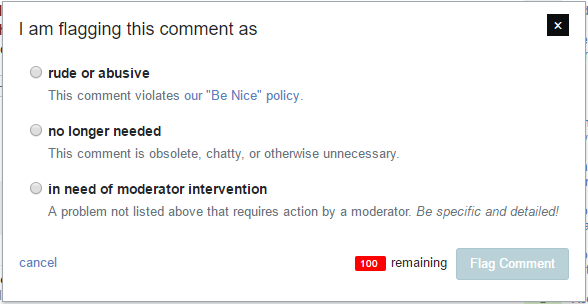 23
What does "not constructive" mean, and how does it differ from "too chatty"?
3
Abusive post / offensive comment
4
Wasn't there a "not constructive" flag for comments?
799
Recent feature changes to Stack Exchange
87
Updated comment flagging - Supporting the new Code of Conduct
160
Why do some people answer in comments?
119
Make comment flags less stupid
38
How should we deal with RTFM comments?
81
What features did the Community Team discuss, have implemented, or have denied last month?
33
Does the 'not constructive' flag have a strongly negative connotation? If so, can we have more detailed clarity on its use?
See more linked questions

42
What are valid reasons for flagging comments?
222
Allow flagging a comment after upvoting it
48
Could we have some consensus on how to flag bunches of obsolete comments?
119
Make comment flags less stupid
93
Community deletion of comments should raise a moderator flag
50
Can we implement temporary automatic comment ban on 'x' number of validated rude comment flags?
265
Let's hold language in comments to the same standard as posts