What did Stack Exchange/Overflow change in May 2016 that cut low-quality questions so dramatically on the flagship sites?

So, I'll confess, I'm addicted to SEDE. To date, I've spent most of my time crafting queries to help with Spring Cleaning over on Chem.SE.

However, alongside the site cleanup efforts, it appears that the impending approach of finals, standardized exams, etc. is resulting in an uptick in lower quality, "HOW I DOZ THE PORBLM" sorts of questions on the site. This got me curious as to whether Chem.SE has seen similar inrushes of lower-quality questions around this time every year.

So, naturally, I wrote a query. Disappointingly(?), no such trend is evident.

However, out of curiosity I ran the query on some other sites. The results on SuperUser were striking (click to enlarge): 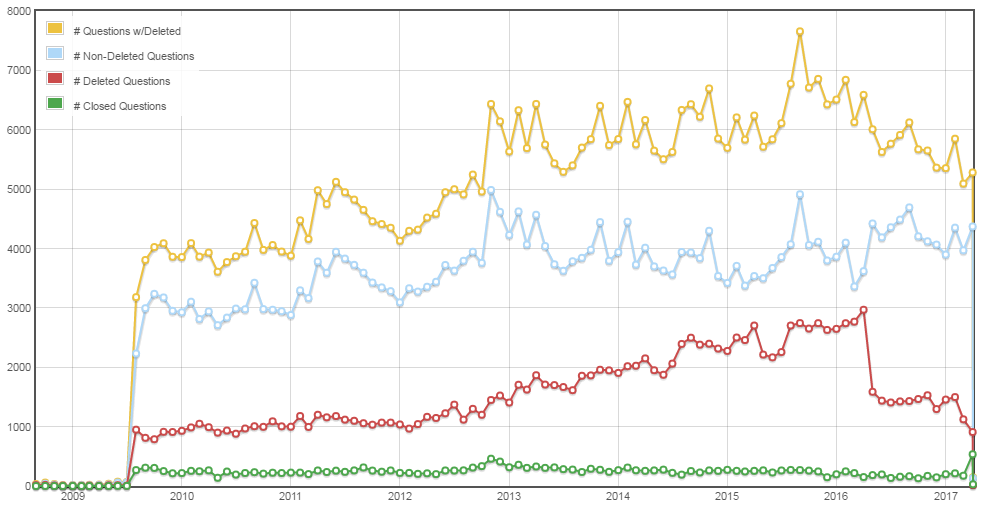 What did the Stack Exchange network do in May 2016 that reduced the number of low-quality questions so dramatically? I looked around Meta.SE a bit to see if I could find anything relevant, but without success. This Meta.SE answer talking about the hoops new askers have to go through is from 2014, and so is an unlikely explanation for the change. The second iteration of the SEQP was under heavy discussion in Oct 2016, well after this drop occurred, there doesn't appear to be anything around that time in se-quality-project, and a search of Meta.SE over the first half of 2016 yields nothing particularly illuminating.

FWIW, a similar drop is evident for the other major SO properties (click thumbnails to enlarge):

However, the drop is absent for most of the other sub-sites I checked—viz., Software Engineering, AskDifferent, Arqade, Physics, Math and Chemistry. Unix & Linux did show a slight drop around that same time, but it looks like more of a correction to an aberrantly high number of bad questions that the site received in April 2016.

So, again: What did Stack Exchange do in May 2016 that has had such success in discouraging poor-quality questions on the major sub-sites?

There's a job that runs weekly which deletes any question more than 365 days old which...

On Super User, there are currently 10,484 questions which qualify to be deleted under those criteria except that they're less than 365 days old - so in 30 days, around 900 of them will be deleted.

Same goes for most sites, with obviously a lot more questions qualifying on most of the larger sites. As such, you'll always see a significant drop in deleted questions extending roughly 1 year in the past (with smaller drops for the last 30 days and last 9 days).

248
Can we prevent some of the low-quality questions from entering our system?
258
Let’s improve our site navigation
410
Graduation, site closure, and a clearer outlook on the health of SE sites
537
The MIT License – Clarity on Using Code on Stack Overflow and Stack Exchange
2793
A Terms of Service update restricting companies that scrape your profile information without your permission
829
Net Neutrality and Stack Overflow / Stack Exchange
496
Congratulations to our 29 oldest beta sites - They're now no longer beta!
2269
Stack Overflow is doing me ongoing harm; it's time to fix it!
77
I feel that lately the answers to my questions on Stack Exchange are low quality
758
New Feature: Table Support