Is there a way to know which user was removed?

Recently I lost some reputation when a user was removed: 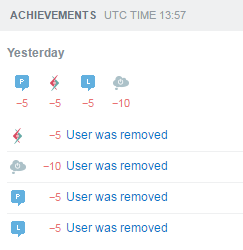 Out of curiosity, is there any way to know which user was removed?

This information shouldn't be made accessible to the public, for good reasons. When a decent number of votes are invalidated, it's either

Only the first case, which is the rarest, is info you should/might obtain, and the others are what mods and Community Managers deal with.

The other cases are most probably people you've never come across, and you wouldn't recognize them even if you knew that acoolguysomething99 voted on your posts.

Furthermore, as the comment and the other answer indicate, voting is always meant to be anonymous, and only the extreme cases of suspicious voting are revealed to mods. Telling you someone did vote on your posts would negate that.

If we revealed who placed those votes when the user was removed, it would no longer be anonymous.

Not the answer you're looking for? Browse other questions tagged discussion deleted-accounts user-information .

924
Why aren't people voting for questions?
1843
Could we please be a bit nicer to new users?
540
Recent Reputation History Changes
1250
Don't throw away all votes when a user is deleted
187
Wiping votes on deletion of highly active accounts (-865 points on "User was removed")
2793
A Terms of Service update restricting companies that scrape your profile information without your permission
2507
Firing mods and forced relicensing: is Stack Exchange still interested in cooperating with the community?
720
Dear Stack Exchange: a statement and a letter from your moderators
2258
Stack Overflow is doing me ongoing harm; it's time to fix it!
985
Firing Community Managers: Stack Exchange is not interested in cooperating with the community, is it?