I am using the iOS app (iPhone 6S, iOS 10.2.1, app version 1.6.4) and I navigated to the formatting sandbox meta question and was scrolling down and when I got to the 9th answer and saw some spoilers, I tapped on them to reveal the content and started to scroll again only to have the app crash. I tried it 10+ more times with the same result.

Edit: I've also encountered the same problem on this post as well, though I haven't been able to find a consistent reproduction scenario for this question. It seems that sometimes only 5 posts are loaded and it runs into a similar problem. I don't know if it is the same bug, but in trying to reproduce the bug on this question, I have showed all the spoiler and managed to scroll down to the 5th post, however I was not able to load the next 5 answers.

Below is a picture of how far I can scroll before it crashes. 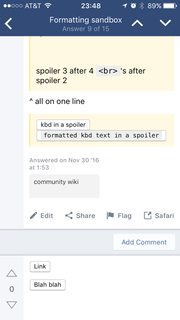 Okay, I did a bit more testing, and edited one of the higher voted posts (edited several others as well, had the same results, so I rolledback the edits) to have a spoiler to see if it position of the answer mattered at all. I showed the spoiler on it and scrolled to the bottom, and there was no crash and the next answers loaded fine. Though if I do the reveal the spoiler in the 9th post it still causes a crash.