What are constructive ways to deal with eye-brow raising input?

Last week, me and some other folks commented on GOOGLE MAPS DOESENT LOAD SOMETIMES; telling the OP that SCREAMING AT USERS is maybe not a good idea.

Today, this came back: 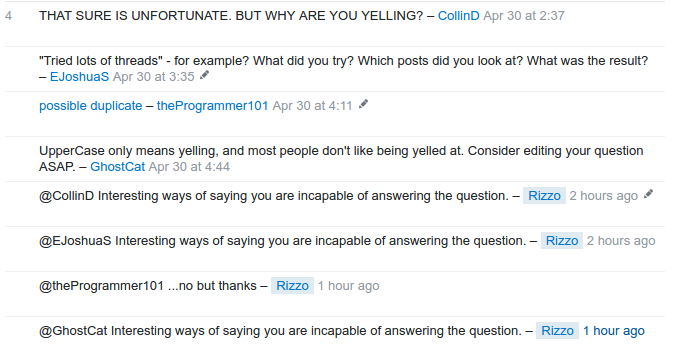 I am still a bit puzzled; and wondering: beyond pimping my "helpful flag" count by flagging all those comments as "not constructive"; are there other constructive ways to deal with such feedback?

The most constructive way would have been to avoid that to begin with by CollinD not posting:

THAT SURE IS UNFORTUNATE. BUT WHY ARE YOU YELLING?

And instead editing the post in a constructive manner, which will not only show the OP how a post should look, but can also set a good example to others.

Given that that first comment is NC in itself the second best way to have dealt with this would've been to flag CollinD's comment as NC and hope it gets removed before a back-and-forth starts, and still, edit the post in a constructive manner.

Of course you have no control over that and cannot change the past, and often you're just walking in to the middle of one of these situations. The best possible approach in this situation is simply to say nothing, not engage, ignore them, flag the comments, edit the post (if it hasn't been fixed yet), possibly answer the question if you can, then move on (or if the comment discussion is large just raise a custom flag on the whole post requesting a comment clean-up).

There is no conceivable constructive comment response you could have that would be useful here, certainly not in the short run, and in the long run the user will either a) get the hint from deleted comments or just improve naturally, b) not really be active enough to cause actual problems, or c) start to trigger some mod action as a result of all the flags and be dealt with accordingly.

The only thing a comment back-and-forth really accomplishes is to imply to a new user (or to other users) that such a back-and-forth is an acceptable norm, which is the opposite of what you want.

By the way, here's a good way, in general, to get a good idea of what should have been done in retrospect: If the post ends up getting cleaned up by users and mods, just take a look at its final state. For example, right now Google maps doesn't load sometimes is more well-formatted, and all of those comments were removed, and the original issues brought up look to have been solved.

Then, after you look at its final cleaned up state, ask yourself what kinds of things could've been done to help it to that point from the very start, and use those to help you make decisions about future posts: Editing the post would've moved it towards that state. Flagging the comments would've moved it towards that state. Adding new comments would not have. And given that its current state isn't so bad, things you may have done that were counter to this were probably not the most effective things to have done. That entire comment conversation was, at the end of the day, essentially moot, as its gone now and wasn't truly necessary. Avoiding them to begin with saves the poor mods some work. :)

Basically, imagine the ideal post, and, if you are going to do anything, do only what it takes to get it there, in the least roundabout way possible.

Model the behaviour you want

IF you can answer the question, please do. The rude OP and the unfortunate original formatting are not good reasons to withhold what you know. If it appears to be a duplicate, vote to close it as one. The "no but thanks" comment is nowhere near what it would take to stay my hand on a close vote.

IF you can't answer the question, move on. Downvoting will not change this OP's ways and the sooner you stop interacting with the whole thing, the better.

294
We're working on a new stat to help convey the reach of your posts here
524
The MIT License – Clarity on Using Code on Stack Overflow and Stack Exchange
249
Let's Plan the Second Iteration of the Stack Exchange Quality Project!
329
Brace yourselves: The GDPR is coming!
258
Let's hold language in comments to the same standard as posts
66
What does constructive criticism of a design change look like?
437
Employee profiles are now marked with a “Staff” indicator