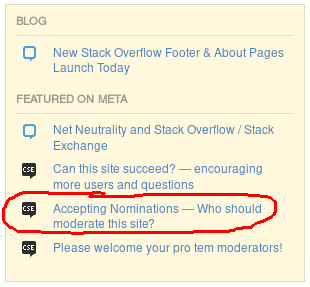 This might have something to do with the fact that the post was locked shortly after the featured tag has been removed.

This bug also extends to the API. During a period when they question appears in the sidebar, the API route /questions?tagged=featured&site=cseducators.meta returns:

This includes the nomination post as well as the 2 featured posts (at the time of this edit).

As Shadow the Hedgehog Wizard mentioned in their comment, the same issue appears with the Meta question containing the hat contest, which was locked shortly before the featured tag was removed (see the revision history for details) and is at the time of this edit still visible in the sidebar.

This is now fixed, hopefully permanently. The issue related to a bug in the Tag Engine (which is used by the API and site when filtering by tags) that affected locked posts.

The contents of the community bulletin are cached and only updated every 24 hours, so it's not unusual to have to wait up to 24 hours for the daily script to update the bulletin's contents (remove un-featured posts, add new featured posts).

If you've waited 24 hours and the bulletin still hasn't refreshed, you should ping an employee.

Not the answer you're looking for? Browse other questions tagged bug status-completed locked-questions community-bulletin featured-tag .

13
Why did a question suddenly become featured when the last edit was almost a year ago?
9
Old featured meta question intermittently appearing in "Featured on Meta" box
3
"Featured on meta" in community bulletin not updating
5
How or when is the featured tag supposed to take effect?
2
Behaviour of 'Featured on Meta' list
250
A Moose, Some Silly Putty ... And A Desperate Plea For Help
89
Hot Meta Posts: Allow for removal by moderators, and thoughts about future improvements

52
What criteria are used to select the links that appear in the community bulletin sidebar block?
5
Community Bulletin displays only 3 (instead of 5) items each time a MSE post is featured in it
6
Featured post on MSE no longer appears in the community bulletins of any SE sites
18
When and why is the [featured] tag removed by the Community user?
3
When is a featured post not featured?