Which language should I use while editing questions? [duplicate]

While editing questions, is there any problem if I change the spelling of words in American English to British English unknowingly (as suggested by my computer)?

I am an Indian and my system language is set to Indian English.

There are lots of differences in spelling between American English and Indian English (Indians use British English).

Well, some examples are here from Oxford Dictionary

While editing questions, The American English words are highlighted by a red color indicating there is a typo. 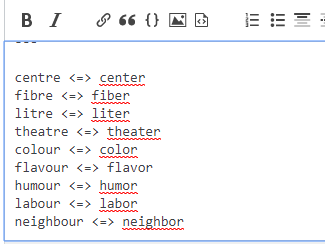 If the highlight is inside a code block, I leave it as it is.

But in other places, sometimes I correct it by doing

Is there a problem in doing so? If I doubt a word whether it is a typo or is a local version of English, what should I do? Correct it or leave as it is? What is the official statement of SE about this?

While editing questions, is there any problem if I change spelling of words in American English to British English unknowingly

Yes, there is a problem.

Don't do such things. Unless you have a compelling reason and can explain how the spelling you have chosen is the universally globally accepted correct one.

Which of course you can't. So don't.

You make those changes. Then I come in to edit, using my dictionary. Guess what? I now see a lot of spelling mistakes that you introduced. So I revert them.

Then you come in to edit...

Not the answer you're looking for? Browse other questions tagged discussion localization .

72
What should the standard spelling be - British or US?
42
Which common English language errors and idioms make SO questions tough to read?

204
What formula should be used to determine “hot” questions?
42
Which common English language errors and idioms make SO questions tough to read?
32
Should the network use thousands separators in numbers?
3
Which Flag should I use?
25
On non-English sites, Flagging dialogs use a mix of English and the native language
10
Language to use in language-related sites
3
Which site should I use for demographics questions?
105
What criteria should we use to determine which review queue indicator a site will have?