Which of my answers have been upvoted on the most days?

My theory is that answers which have received upvotes on 15 distinct days spaced across a year were in fact more valuable than answers which received 100 upvotes within a 2 day period (after reaching the HNQ list) and were upvoted on only two later days after the initial surge.

Similar to the "HNQ boost," when an old question gets an edit or a new answer, the post is bumped to the home page of whatever site it's on and may draw additional attention (and votes). This is perfectly fine, but it's different from receiving an upvote from someone who searched (say, on Google) for that exact question (because they were facing that problem), found the post, and marked it as helpful.

I played around with data.stackexchange.com but couldn't work out how to find the dates of upvotes/downvotes. I know this data must be stored, because it's visible in the "reputation" tab on any user account.

How can I query for the posts which have been upvoted on the most days?

To put in pseudocode what I'm trying to do, it would be something like this:

(Which would probably need typecasting or substring function call to make a date out of a timestamp, but that gives the essence of what I want.)

When run today, this will be the result: 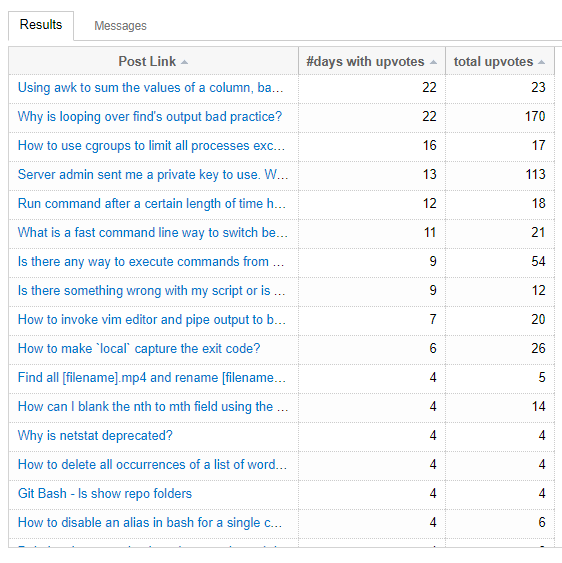 Remember that SEDE is only updated once a week, on Sunday.

34
Daily reputation cap effectively counts downvotes twice
771
Which tools and technologies are used to build the Stack Exchange Network?
18
Does the sock-puppet upvote canceller take into account ratio of your up-votes vs. other people's upvotes?
54
Nicely discouraging serial upvoting
5
How, exactly, are votes locked?
312
Was the retroactive change to CC BY-SA 4.0 approved by Stack Exchange's lawyers?