Should I be offered reject button on the tag-wiki I wrote myself?

Recently I suggested edit to tag-wiki on MathOverflow (I am below 20k on that site.) The suggested edit was approved. When I looked at the edit suggestion again, I noticed that I am offered reject button together with this explanatory text (screenshot below):

This suggested edit to your post has already been handled and your action is no longer required.

If you disagree with this edit being approved, you can return your post to its previous state using the Reject button below.

This does not seem to be specific to one site, I found the same behavior on sports.SE (screenshot below).

If I understand this correctly, the system consider me as the owner of the post, since I created the tag-wiki. And then, since a suggested edit was made to my post, the system offers me a possibility to reject it. (IIRC the post owner has the final say on suggested edit and they can vote to approve or reject suggested edit of their own post, regardless of their reputation.) 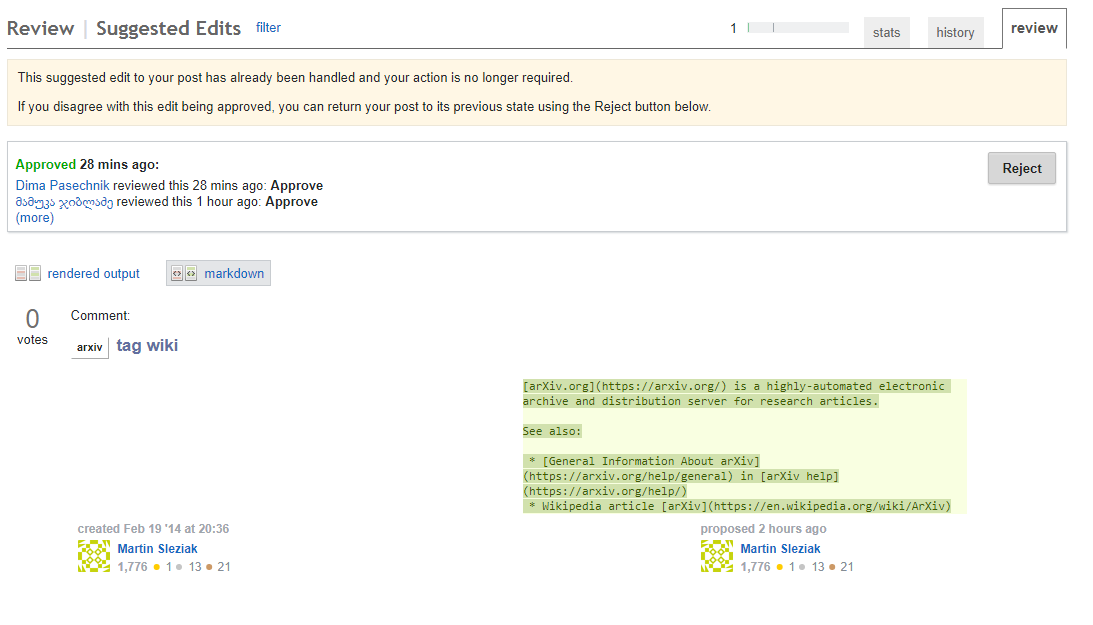 This is definitely something we just didn't consider when implementing this feature. We had tag wikis in the back of our minds as "eh we're not really sure how well this will play with them" but didn't consider the user permissions aspect.

That said, this feature introduces a serious loophole in that the "owner" of a tag wiki can unilaterally approve all of their own edits after-the-fact if the community opts to reject them. So I poked Oded to tweak the permissions there to only ever show those options to moderators on tag wikis and their excerpts. The fix will be live at the next build.

Not the answer you're looking for? Browse other questions tagged bug status-completed suggested-edits tag-wiki .