How much is a Stack Exchange reputation point worth, roughly, to the company?

The Stack Exchange websites are run for profit, and they work by publishing questions and answers that are valuable by two measures: the number of clicks they gain, and how many points they get given by users. It's in the company's interest for the two measures to stay correlated; and while the first correlates with profit, the second correlates with reputation points because every time a contribution is marked as good its author gains reputation.

So I wondered whether the company uses a rough conversion rate between reputation points and US dollars, and if so what that rate is, or if they don't use a rate or don't want to reveal it then what the rate might reasonably be. Of course the relationship might not be linear, so for example if a 1k-rep user's work is worth $100, a 100k-rep user's work might be worth $20000 and Jon Skeet's 1.1M rep...well I don't know!

For comparison, here are some articles on the value of a "like" on other social media sites:

"What is the Real Value of the Facebook “Like”?"
"What is the value of a ‘Like?’"
"What’s the Value of a Like?" (Harvard Business Review - they cite a recent report showing that 80% of the US companies surveyed were "unable to quantify the value of their social media efforts", but they are looking at companies that advertise on Facebook rather than Facebook itself)

In the last round of funding, 2015, the Stack Exchange valuation was around $460 million [USD].

Total reputation in each of the top ten sites* by number of users:

Of course there are many, many flaws to this method, but it's one way to assign arbitrary value to an arbitrary fake internet point system.

If someone purchased Stack Exchange the valuation would be much greater than $460M [USD], however they wouldn't necessarily be buying the reputation of the users, but the content and the userbase itself. When Microsoft purchased Minecraft and LinkedIn they weren't buying a product, they were buying players and users - established customer bases and communities.

So the $0.43 is hugely inflated, however there really is no easy way to accurately gauge the value since there's no market. We can make up any sort of calculation that we want, but until reputation becomes something easily and widely traded then there's no real way to evaluate its actual value.

*I'm ignoring meta.SE for the purposes of this post.

No, we don't. We don't attach monetary value to reputation. Never did, never will.

It doesn't make any sense to do so.

Pending the investigation of the applicability of Bathsheba's excellent suggested model, I took a sample of 25 users of Stack Overflow and for each of them I looked at their reputation score and the number of "people reached". The sample comprised the authors of the five answers posted here prior to this one, along with the lowest-score users on each of pages 1-5, 51-55, 101-105 and 201-205 of the listing of SO users by rep.

An estimate based on what's been written so far would be maybe $80-$400 (£60-£300) per 1000 rep, or $16-$80 (£12-£60) for a full 200-rep day. Since the estimate of the company's value at $500 million is based on the idea that it's going to be around for some time, and since the number of views of any much-viewed page is going to increase during that time, a reasonable estimate of the amount of value corresponded to by reputation should be in the higher part of that interval. I would suggest a ratio giving the following figures:

(I'd be grateful for some help making a data query for "people reached" against "reputation" points for a bigger sample.) 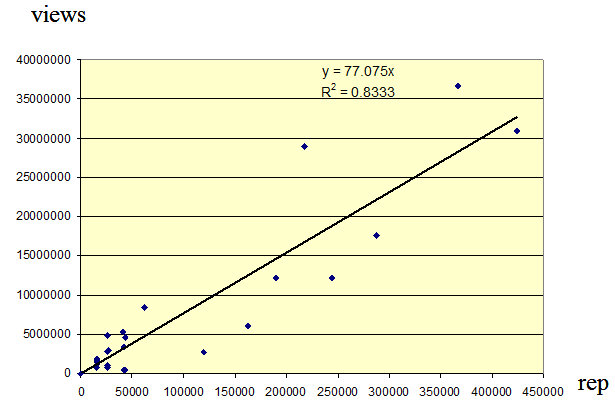 I have 100k reputation on Super User. Quite literally the only material benefit I have gotten from it is a mug, a T shirt and assorted swag.

SE doesn't make money directly off our answers, but indirectly off the 'reputation' of the site - as a good place to get answers, and leverages that for ancillary products, like careers and advertising.

So, your premise is probably flawed, and there's no way to set a dollar value on a user's reputation. This isn't even taking into account things like moderation activity or goodwill from other users.

The business model of SO as a company is structured in such a way that it's income isn't correlated with reputation, so you cannot attach a monetary value to reputation.

My thought: it's not worth anything.

A comparison between currency and reputation makes little sense so therefore you can't think of the value of Stack Exchange being in "reputation". The mathematicians amongst us would not consider a substitution of reputation for currency as a valid change of measure. A couple of reasons in non-technical language:

where v is the value, r the reputation, t time, a is a constant and b a function that might end up being too time-dependent for anything useful to be gleaned here. If b turns out to be practically constant or even linear in time then you have stumbled upon something truly brilliant. Not sure where you'd get the data from though to test this model; you can probably get r(t) from a fancy data query, and v(t) from the stock price and shares outstanding data. Good luck!