Add a toggle to collapse the hot network questions list

While the hot network questions list can be entertaining, there are a few situations in which it harms the experience of using SE sites, especially when you use SE sites at work.

I know that variations of this have been asked before, but I think the way the SE network changed in the meantime does merit a new discussion about this. We have far more sites that are more entertainment than professional now, and the mix of entertainment and professional topics makes the HNQ list problematic in some cases.

There are a few situations I can think of where the presence of the HNQ list has a negative effect:

I know this can be solved by a user script, but that is not a real solution and has several drawbacks. It's seriously annoying when you use multiple devices, it only solves the problem for a tiny amount of users. User scripts are a workaround, not a solution.

We don't have any control over the HNQ list, especially on work computers where the workarounds can be disallowed. We can choose which SE site to visit, but the HNQ list is always there, mixing professional and unprofessional content.

What I'd propose is to make the HNQ sidebar collapsible, and remember the collapsed state for the user session (or forever for that user). A single click would collapse the list to only the title, and a second one would expand it again to the full list. This would make it easy to hide the HNQ list for a short time, e.g. mondays when Game of Thrones is running, or essentially permanently as well, if you simply don't care about them at all.

Yes, and the list should start collapsed for users who haven't recorded a preference. This includes all the visits from people who don't have accounts (or aren't logged in).

No matter how good the HNQ algorithm is, there will always be questions on it that -- while completely appropriate questions on their sites -- are not good candidates for context-free publication to all other sites. Sites have no way to withdraw questions, even if they did somebody would have to notice first, and it would take a lot of human power to curate the list. On the flip side, removing individual sites just because there might be, say, questions with movie spoilers isn't fair to those sites if they want the exposure.

So if we're going to put hot network questions on every site page, we should at least (a) make it collapsible for those who don't want to see it and (b) start collapsed with some sort of indication of what's behind the toggle or invitation to explore a random slice of the rest of the network. If we do that, then "you chose to look" becomes a completely valid response to any complaint about somebody having to see a post about poop from Parenting or gender roles from Islam or (insert position here) from Politics.

Sometimes HNQ is really frustrating but not always. So I think this will be good if implemented.

I did a small workaround and the below code can perfectly add a toggle button to the HNQs.

It will work as When Items are visible 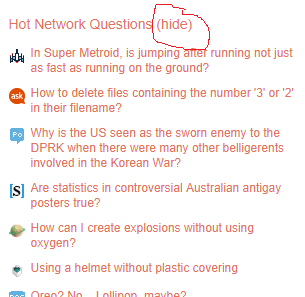 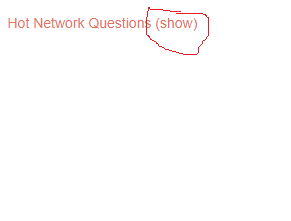 But making this as a userscript is not an option because you have to install it in each and every device.

So I think the developers implement an option like this.

This is tested on Stack Overflow and some other SE sites

If you use Adblock Plus or uBlock Origin, you can hide the Hot Network Posts section by creating a filter for *.stackexchange.com###hot-network-questions 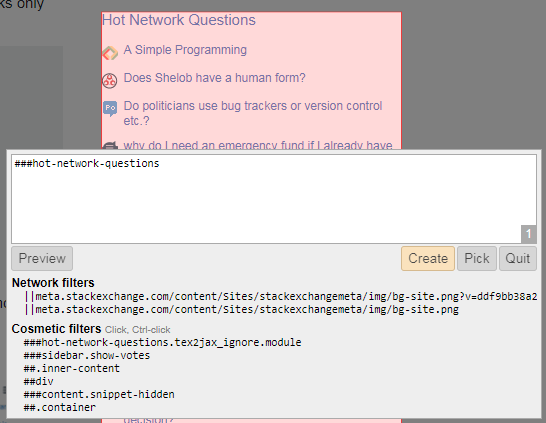 Not the answer you're looking for? Browse other questions tagged feature-request hot-questions .