I suggest that moderators be required to leave a comment when declining a custom flag.

When flag-setters took their time to explain the reasoning behind their actions, moderators should show their respect, and reciprocate by explaining the disagreement that caused them to decline the flag. This goes beyond a simple show of respect: by explaining their reasoning, or even by linking the corresponding FAQ/meta post, moderators reduce the number of incorrect flags that would otherwise be raised in the future. The user may also stop flagging, which would lead to more garbage content left around the site.

Edit 1: The comment does not need to be custom: an applicable "stock comment" would be perfectly sufficient.

Edit 2: For flags declined through community review a "stock comment" should be applied automatically, for example "Community reviewed your flag, but found no evidence to support it."

Just because someone is using a custom flag doesn't mean that they are taking time to explain their reasons. For example, gaze upon this gist of custom flags that moderators on Stack Overflow had handled in a relatively short period of time. It is our experience that few of the people leaving those kinds of flags even bother to read decline reasons.

In particular the first and fourth categories are almost always used for custom flags and would be useless if we couldn't provide stock responses. The fourth reason was added by SE in response to moderator complaints about people using custom flags to jump the close votes queue. We got so many of those that they added an entire reason for it. Same deal with the technical inaccuracy response, because many people use custom flags to try to get us to delete answers they think are wrong.

These standard decline reasons were added to save us time, and if we couldn't use them we'd end up writing basically the same thing over and over again for no good reason. In fact, many moderators already have an even larger list of template decline reasons that we can copy-and-paste from for even less frequent cases.

I do regard flag decline reasons as having educational value, so if I'm going to decline a flag and the stock reasons wouldn't properly describe why or wouldn't apply, I do take the time for a custom message.

In the recent SO election chat room, some mods said that there is around 2000+ items are pushed each day to the mod flag review queue. If the mods add comments while declining, it will take even more time to review the flags.

declined - a moderator reviewed your flag, but found no evidence to support it

and so on. Still asking them to add a compulsory reason is just waste of time and effort.

Amusingly the standard way of declining a flag actually has a set of preset reasons, including one that reads "Using standard flags helps us prioritize problems and resolve them faster. Please familiarize yourself with the list of standard flags: see What is Flagging?". Every dismissed flag will come with a reason the mod considers most appropriate already.

In addition, you have one flag. I could have 10 on a slightly busy day, 50 when someone goes a bit nuts... and were I a SO mod, have flags in the thousands.

As a moderator - I read through every single flag and I try to take the action I think the most appropriate. If you need a custom flag, and its clear and appropriate, we'll handle it.

If its just trying to use flags as a PM system of sorts with mods... Using standard flags helps us prioritize problems and resolve them faster ;p.

So, the action taken and whatever stock reply you get ought to be necessary and sufficient unless further investigation is needed. If you feel a flag refusal is completely unfair, a few folk have chosen to take it to meta - I do realise it goes away from the anonymity of flagging, but we're talking sitewide policy here.

Ah, I was expecting this post-mortem after seeing that second custom flag. I just expected it to be asked on Meta Stack Overflow, rather than here.

As stated already, although perhaps not quite clearly enough, moderators cannot provide an explanation for comment flags. We have only two options: "delete" (which automatically marks the flag as "helpful"), and "dismiss" (which automatically marks the flag as "declined"). So, we can either delete the flagged comment or not delete the flagged comment.

The reason it's set up this way is that none of us is suppose to agonize about comments. Our official guidance on processing comment flags is here; specifically:

Note: don't be too concerned if the occasional comment flag is declined; comment value is often subjective and moderators are encouraged to process flags quickly - in most cases, it's no big deal if comments persist a bit longer than needed.

That pretty much covers everything you need to know. It would be a massive waste of moderator time and resources if we had to write a custom message on every declined comment flag, and it would just lead to all comments being deleted by lazy moderators, which is a cure worse than the disease. The correct course of action is to flag comments you think should be removed, and then go on about your day. If the moderator agrees, and they're removed, then great. If the moderator disagrees, and they're kept, well then who cares? Always better to err on the side of caution, and keep comments that may add value to a post (assuming they're not rude or offensive), and this is precisely what I do.

If you desperately want a response from a moderator, then flag the post to which the comments are attached. We'll then be forced to attach a message with our decline, but it'll probably be snarky. My response certainly would have been; I interpreted your second flag message ("Why did you decline my flag without even leaving a comment? The guy asks a side question, I suggest to him that he should ask a real question, that's a classic "too chatty" flag, no?") as something akin to: WTF idiot? Why aren't you doing your job and deleting what I say obviously needs to be deleted?

For what it's worth, I, like Brad, consider flag decline reasons to serve an important pedagogical role. If one of the "canned" decline reasons doesn't perfectly fit the message I want to convey, I will take the time to type my own. It doesn't take me that long, because I'm a very fast typist; besides, I think it's worth it. We do get a lot of spurious and nonsense flags, like those in Brad's gist, but the only way people are going to learn to stop raising these flags is if we tell them why they are unwelcome. Comment flags don't get the same attention because they just don't matter as much.

Regarding the specific comments that you flagged, I declined both flags for two reasons:

By the time the second, custom flag was raised, the conversation had proceeded further. The user responded, arguing that their question was relevant, and then you gave in and posted an answer. I deleted the intermediate comments, which had now become obsolete, but chose to keep the initial question and your response, because I felt they added value to the answer. Of course, you had flagged the comment containing the initial question, so since I wanted to keep that, I had little choice but to decline the flag.

You had previously flagged other comments on that same answer, and I had deleted those because I agreed they were obsolete or otherwise no longer needed. In the interest of full disclosure and context, this is the answer, including deleted comments: 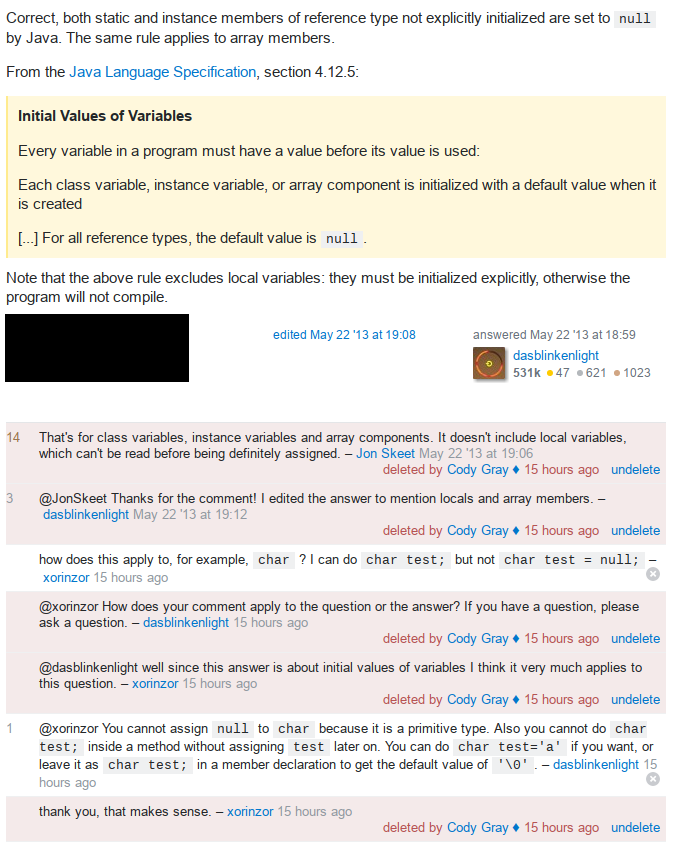 The top two were the ones I deleted in response to a flag as obsolete. The third is the one you flagged twice, and the ones after that are as described in the text above.

Don't worry on that. And don't abstain flagging.

The reason to not worry: the actual disadvantage what you get with declined flags, is that you can't flag for a time. You have to have a lot of declined flag even for that. (Assuming you are doing this in good faith!)

The reason to not abstain flagging:

If the mod handles the flag falsely, it will remain trackable by the SE until the eternity. No mod wants to leave such spots on his honor.

If the mod handles flags regularly falsely, it is a problem which will be handled by the SE - and they are on much shorter leash, as we are.

Flags are permanent, and not only for you, but also for the mods. As far I know, the lowest-ranking people in the pyramid capable to delete flags, are the CMs/developers with productive DB access. And they won't ever do this for such a pity problem.

Thus, if they handle flags falsely, he risks much more, as you risk by some declined flags. He won't do it.

Also to me happened already, with a particularly nasty, insulting comment on a meta site. Its primary meaning was an encouragement to commit a criminal offense. Its secondary meaning was an accusation that I committed it already. I flagged it twice, both were declined without a reason. The likely reason was that also the mods didn't very like me at the time. So, I contacted the SE on the contact form - with the polite asking to remove the comment. And the SE removed the comment.

Of course I have no way to know, how it affected the "reputation" of the declining mods in the eyes of the SE. But I am sure, that the mods can't do this too often. Rarely, yes.

Thus, also similar events don't happen to us too often - only rarely. This few cases we can tolerate.

About the general problem (unreasoned declined flags deter users from flagging): as far I know, mods get quite enough flags. As far I know, their work is in a quite large part handling flags. What I don't know, but think: most of them is probably not a very interesting case and the repetitive work of their handling may be not the most attractive part of the modship.

Making the reasons obligatory would deter the mods from this important work :-)

Not the answer you're looking for? Browse other questions tagged feature-request declined-flags .

145
A guide to moderating comments

93
Allow moderators to reverse and/or nullify flag decisions
41
Proposed flag decline reasons?
191
Allow moderators to reply to a flag
41
Community-declined close vote flags should point to the review that declined them
69
Explicitly mention who decided the fate of a flag
90
Community deletion of comments should raise a moderator flag