Earlier today (or at least a couple of days ago) the review queues had numbers showing up indicating how many reviews were pending in each. Those are now missing, and there's no indication of which queues have how many reviews: 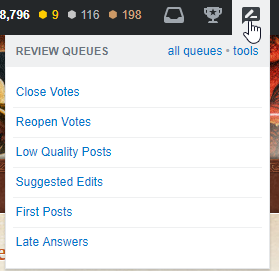 (This screenshot was taken with all userscripts disabled.)

Some of these queues have reviews pending in them for me to act on, but no indicator is showing up at all. I clicked this menu because its icon was orange, and I visited all queues and there were two queues with one review each in them. 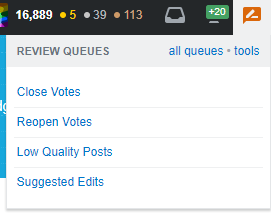 (There's some earlier discussion of the review indicators being removed in Where are the review queue counters?, but this doesn't appear to describe a bug about the indicators going missing even when there's reviews.)

This seems to be fixed now.

It seems that queues will have dots that are colored to reflect the number of reviews pending. This number is apparently set on a per-site basis to allow sites with differing review tasks volumes to have dots colored appropriately for their site.

Here's an example from Interpersonal Skills: 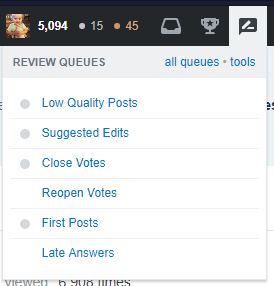 Thanks to the team for fixing this so quickly.

Not the answer you're looking for? Browse other questions tagged bug review top-bar .

53
New top bar is coming to the Stack Exchange network
22
Where are the review queue counters?

540
The current review system encourages fake reviews; some people upvote everything rather than actually fixing problems
251
What are the review queues, and how do they work?
165
Allow all reviewers to see deleted posts they reviewed
49
How does the review-needed indicator work exactly?
37
Experiment: Review-needed indicator logic for sites that sometimes have empty queues
106
What criteria should we use to determine which review queue indicator a site will have?
229
Improved experience for users with review suspensions
121
Visual design changes to the review queues
79
New onboarding for review queues