When using the chat search and trying to filter by user, I get this after typing several letters: 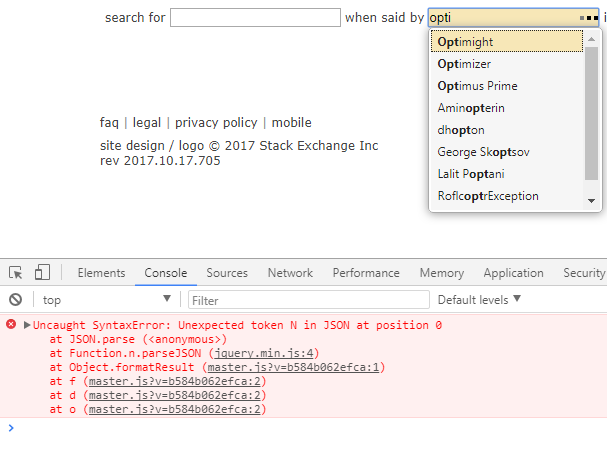 Turns out this is similar to the bug described here: the N which is the "unexpected token" is the N in "No records." again. But now instead of messing up the formatting a bit, it's just throwing an exception.

The bigger issue here isn't so much the error as it is the non-functional autocomplete. This is caused by that same old autocomplete plugin trying to cache the results of the last search - but expecting those results to be in a simple pipe-separated list format, when in fact each result is JSON. Thus rendered unable to match anything in its cache, it resorts yet again to the default noRecord value and hands it off to the formatter - which was expecting JSON, and grouses about tokens.

Once again, providing a sensible default for noRecord would be nice here. But a more important fix would be providing a parser for the JSON, and thus allowing the cache to work. Alternately, disabling caching would allow it to continue working at the cost of a few more server requests.

Not the answer you're looking for? Browse other questions tagged bug status-planned chat chat-search .

159
Should “move-to-chat” be provided on demand (as a button perhaps)?
106
Please provide moderators with better tools for moderating users in chat
44
Reintroduce searching for tags in chat
322
Toward a philosophy of Chat
375
If you're gonna talk Politics, you must respect those who disagree
13
Chat search not returning messages posted after July 8