I just tried to create a chat room and wanted to change the related site. Accidentally I typed 1 and saw an item named "undefined" with broken icon: 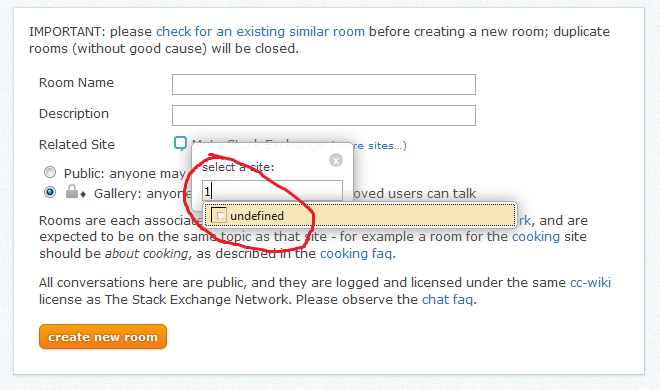 Selecting this item shows "No records." message in the field for a short amount of time. Related site remains unchanged.

This is the outcome for any input that doesn't produce a match. That pop-up uses an ancient (pre jQueryUI) jQuery Autocomplete plugin, recently updated to this fork which has a few updates for support of modern browsers and jQuery versions. But as far as I can tell, this isn't a new bug; it probably behaved in this way for as long as that site selector has been active.

One of the not-particularly-well-documented (or, one might argue, thought out) features of that plugin has to do with what happens if no results match. There's an option named noRecord which defaults to the string "No Records." - this gets passed to the same formatter that normally expects (and gets) an object containing the properties "SiteCaption" and "SiteIcon", and which generates that image + description you'd see for each site in the list. It would appear that, in JavaScript, by default, the string "No Records." has neither property.

And so we get an undefined icon and an undefined description and, if selected, the value "No Records." for an instant until the pop-up is removed from the screen. Naturally, the site isn't changed as there's no site with the domain "No Records."

A fix for this, should anyone care enough to make one, would probably involve setting the noRecord option to something a bit more descriptive than "No Records." and then testing against that new value when considering whether or not to render a match or accept a result.

Not the answer you're looking for? Browse other questions tagged bug status-planned chat .

207
Offer an XMPP method for chat
324
Toward a philosophy of Chat
5
Error while trying to hide undefined community
34
New chat moderation tools for the Teachers' Lounge
19
Is it unusual for a moderator to ask for credentials or other user specifics related to the topic of an SE site?