Why can I only choose certain sites for migrating a question? [duplicate]

Why can I only choose certain sites for migrating a question?

This question has been asked before.

Originally (6 years and 9 months ago): When voting to migrate an off-topic question, why is the list of sites limited? and Off topic questions and redirect to affiliated sites

Latest (3 years and 10 months ago): Migrating a question to another SE site

Can we please revisit this issue? I find it asinine that I can't recommend that this question be moved to Code Review. 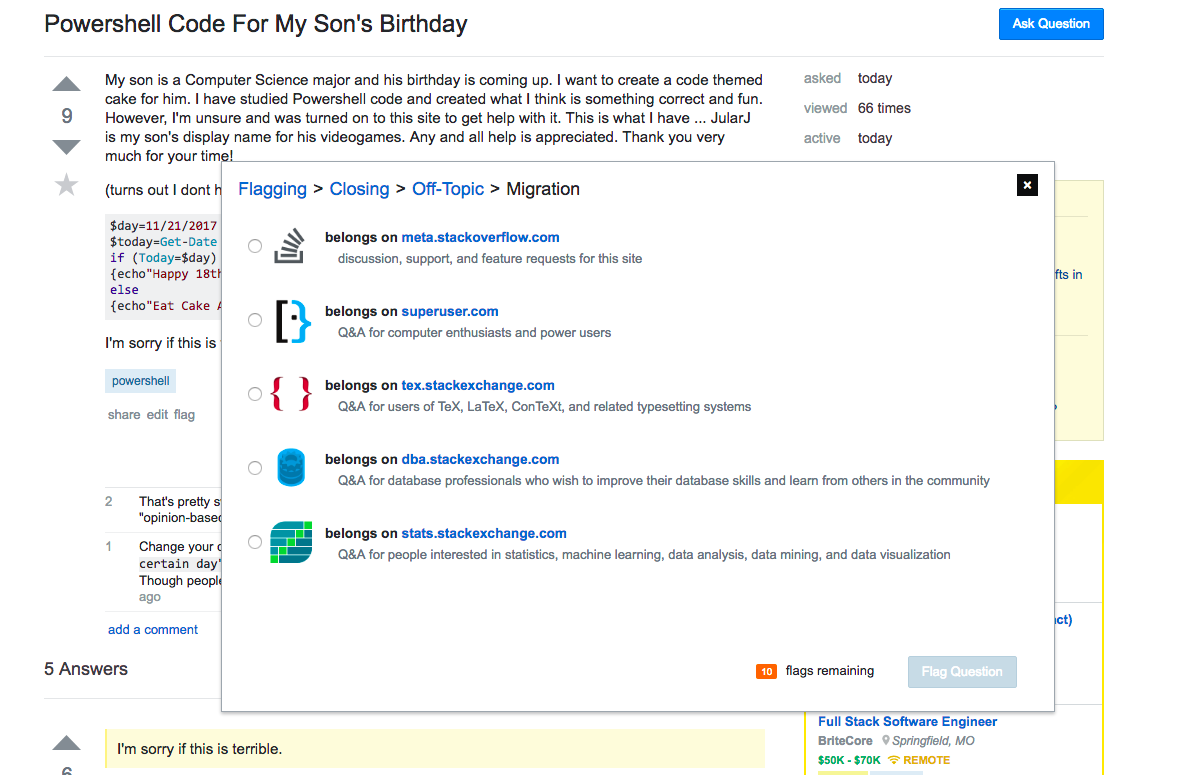 What is currently suggested as a "solution"

The latest official stance (from the original question) is:

The list of sites is limited because many people who vote to migrate do not fully understand the scope of the target site, or migrate questions that are of marginal quality, so many questions get migrated when they shouldn't be. This is further illustrated in Jeff Atwood's answer.

(Bold emphasis is mine)

I am trying to flag the question for moderator attention! How could it possibly be more convenient to flag a question in a jury-rigged way than to just give me the ability to flag it correctly in the first place? If for some illogical reason you don't want to give me the ability to choose any site to suggest migrating to, then why not add an option after the 5th and final choice of "Other", so it is obvious this is where I should write something in? As it is, it's complete guess as to what steps of flagging-button-presses I have to hit in order to get to an all-purpose "Other" page.

Based on your comments, it looks like you're confused about what that dialogue does. Closing a post with a "migrate to" reason - if successfully agreed on by sufficient close voters - actually causes that post to be migrated to the target site. There is no moderator intervention there, it's completely done by users with sufficient reputation.

As such, it occasionally creates some strife when users start migrating questions that are actually not valid migrations, often because they're not on topic on the target site or they're really poor quality questions.

As such, we limit which sites can be targets for the general close voting populace to avoid questions being migrated to vastly unrelated sites, particularly where the users on the initial site may be completely unfamiliar with the target site or when there has been a bad history of migrations between two sites.

So, no, we don't want to use the same exact closing dialogue for suggesting migrations to the moderator team as we do for actually voting to migrate the question.

If your goal is to point out to the moderators "hey, this might be better over on X site", use a custom flag. If they agree, they'll migrate it themselves. They can send posts anywhere they like. If you're worried about having to click through a bunch of dialogues, well, you'll likely memorize which sites are user targets for migration eventually. There's usually not too many options.

We don't need a special moderator flag dialogue that has a "migrate to" recommendation.

As far as Stack Overflow to Code Review migrations, there's an explanation from 2014 here.

One part of the explanation there is:

Not the answer you're looking for? Browse other questions tagged feature-request flags migration moderator-tools .

75
Migrate to *any* site?
2
Limited options for migrating questions to other sites
51
Off topic questions and redirect to affiliated sites
62
When voting to migrate an off-topic question, why is the list of sites limited?
2
Migrating a question to another SE site

258
Reset votes on migrated questions
385
Send authors an inbox message if their question is closed
78
Provide read-only status to moderators on other Stack Exchange sites
1250
Don't throw away all votes when a user is deleted
185
Can we get a comments only lock?
315
Build and strengthen the Stack Exchange community with "crossover questions" between sites
116
Add a "don't migrate crap" migration 'path' to all sites
300
Add optional box for spam flags letting you say why you think it's spam
182
A proposed philosophy of question migration
422
Can a machine be taught to flag spam automatically?