Could we please rename the Controversial Topic Post Notice?

It seems like the Controversial Topic notice could be worded a little better:

Controversial Topic — You may use comments ONLY to suggest improvements. You may use answers ONLY to provide a solution to the specific question asked above. Moderators will remove debates, arguments or opinions without notice.

I know I'm not the first person to question whether the word "controversial" was the best choice, and I'm pretty sure I won't be the last.

When the notice is applied to some questions it may give the OP and future readers the somewhat unpleasant impression that the subject matter is inherently, well... "controversial" and it's kinda easy to be offended by that implication.

In my case it was applied to a question asking about communicating with family about my sexuality, and correcting their language missteps when they talk about LGBT+ issues. Of course people who are generally unsettled by the topic felt the need to chime in, and eventually the notice was added to keep things civil and on topic. I have no problem with the post notice in this case apart from the wording. People were doing what they usually do with these sorts of questions, and the post notice slowed them down a little.

I hate to have to put it like this, but none of the things above should be controversial. The issue isn't that the topic is controversial, the issue is that some people feel it's ok to break the be nice policy and say some pretty unpleasant things to people and/or use a comment or answer as a soapbox to preach their personal point of view.

Now I'm sure some will say that the topic is controversial simply because someone wants to argue about it... That's not a great argument. There are still people that argue that the Earth is flat, but most of us probably wouldn't say that the issue is somehow controversial or even up for serious debate.

So, could we please try to think up a better word than "controversial" for the shiny new post notice?

Considering that none of the other post notices have a "title" like that, the easiest solution is to simply remove the bold section entirely, leaving:

You may use comments ONLY to suggest improvements. You may use answers ONLY to provide a solution to the specific question asked above. Moderators will remove debates, arguments or opinions without notice. 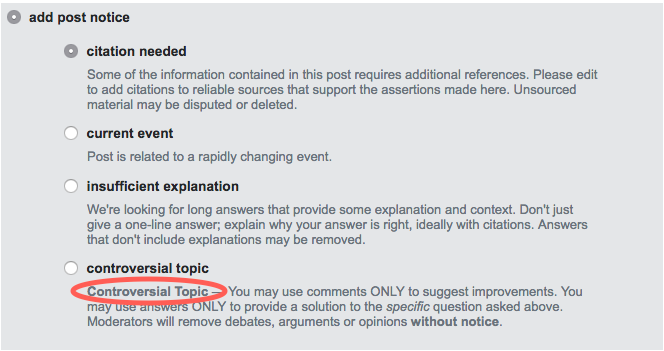 I've had discussions about this for a while, with various people as it hasn't sat well with me. When I was first approached about this post notice, I made some suggestions for improving the text, which were accepted, giving us the "Controversial Topic". Upon reflection, I found that this was not the right wording for me. I wrote in chat at one point:

I'm concerned actually about our "Controversial Post" post notice... I want to use it on something that I hate calling "controversial" it sounds so negative and I'm really sad to call a question about someone wanting to dress in the gender they identify with "controversial". I wonder if there's a better name for the post notice that isn't so... heavy?

So, the solution is simple - make the post notice match the others. Remove the bold text.

For reference, I'm a moderator on Interpersonal Skills, one of the two sites that can use this post notice.

The notice was originally called "controversial post" not topic. I changed that wording on a whim in response to a comment on the announcement, but should've given it more thought.

That was a mistake; I sincerely apologize for my carelessness.

There are, of course, plenty of topics that are not inherently controversial but which can and do result in controversy arising from specific questions related to the topic. This notice exists to call out this potential pitfall for participants on threads that've already demonstrated themselves to be controversial - as such, "controversial post" is the accurate description.

I've restored the original form; thanks for pointing out the problem.

If we wanted consistency with the other notices, a lead-in such as "This post lends itself to debate and discussion." would be an accurate replacement for the shorter version that now exists. I'm skeptical that the added verbosity would benefit anything though.

"Controversial" isn't wrong; at least on The Workplace, the other site using this notice, it's a good description of the questions that generate 50 comments (many rude) and several snarky/rude answers in the opening hours. That stuff isn't appropriate anywhere on the network, but when we've already flushed a bunch of stuff, we'd like a way to pre-warn people about to start the next wave, and manually crafting moderator-notice comments wasn't cutting it.

When we discussed the first word in chat one night, "controversial" was the best of the options we came up with. I remember proposing "explosive", which was more cathartic than helpful, and might have thrown out "volatile". But those options sound more judgemental than "controversial", which is more neutral and objective.

Perhaps "sensitive" would be better. What wouldn't be better is a longer introduction like what was originally proposed for this notice; we want to get to the point quickly, in hopes that people will see it.

If we really must have the bold text... It seems to me that a simple "Remember" would/could work. As in:

Remember — You may use comments ONLY to suggest improvements. You may use answers ONLY to provide a solution to the specific question asked above. Moderators will remove debates, arguments or opinions without notice.

If I remember correctly moderators on Stack Exchange have always removed noise without notice. Why should these questions be different?

Not the answer you're looking for? Browse other questions tagged discussion feature-request status-completed post-notices .

28
Request for a new post notice for The Workplace: "sensitive topic / be nice"
32
What about site-specific post notices?

1494
Fastest Gun in the West Problem
1843
Could we please be a bit nicer to new users?
1250
Don't throw away all votes when a user is deleted
728
Your answer is in another castle: when is an answer not an answer?
2793
A Terms of Service update restricting companies that scrape your profile information without your permission
2507
Firing mods and forced relicensing: is Stack Exchange still interested in cooperating with the community?
720
Dear Stack Exchange: a statement and a letter from your moderators
2258
Stack Overflow is doing me ongoing harm; it's time to fix it!