How many upvotes does Jon Skeet have?

Since daily rep caps out at 200, a large majority of upvotes on Jon's posts never get "counted" as rep.

My question is: how many upvotes does Jon Skeet have?

Motive: I am interested in examining user output/quality using a less penalizing approach than rep counts (which is limited/throttled).

Update: This is not a dupe of Interesting queries on Data Explorer because my question is neither asked nor answered in that post.

Using the "Top 10 Total All-Time UpVoted Users" Query that I created via the Data Explorer, we can see Jon Skeet does in fact have the most upvotes of any user.

The top 10 most upvoted users are: 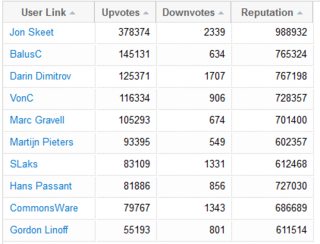 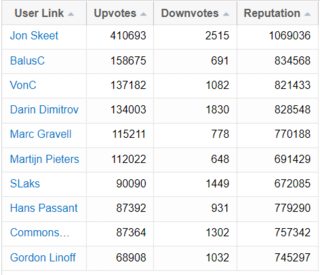 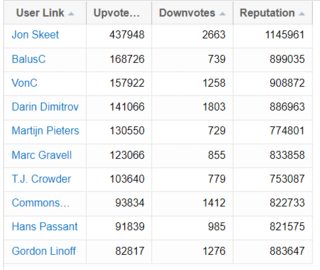 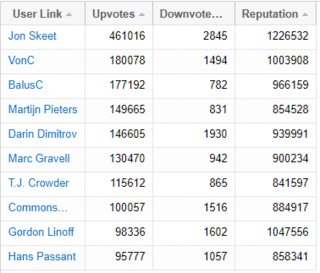 (as of 26 November 2017 morning; SEDE is updated once a week, and including Community Wiki posts. If you don't want those, feel free to write your own query; it's a nice exercise for your SEDE skills.)

Not the answer you're looking for? Browse other questions tagged discussion reputation voting up-votes fun .

564
How does “Reputation” work?
366
Jon Skeet Facts
1
Indicate How Trustworthy the UpVotes Are
510
How does SOPA threaten Stack Overflow / Stack Exchange?
573
What is serial voting and how does it affect me?
95
Does Jon Skeet ever have to answer another question to remain the #1 user on Stack Overflow?
4
Rep cap, downvotes and un-upvotes
303
We're working on a new stat to help convey the reach of your posts here