How are private rooms frozen?

Private rooms work so that if there's no moderator activity in them for seven days, they're automatically frozen. This doesn't prevent the moderators from using them, as mods can still chat in a frozen room, but it does prevent anyone who isn't a moderator but was invited to that room from using it. This includes moderators of sites other than the one the room is parented on.

Anyway, the moderator room on one of the sites I use is really low-use and it gets frozen and unfrozen a lot because I don't really like talking in a frozen room even if I can. As such, I have a bunch of data points of when the last message was posted and when the room is frozen. I was looking at them the other day and I noticed that the time of the last post was not the same as the time the room was frozen seven days later, which I half expected.

My second guess was that there was a script that ran at a scheduled time each day and closed any rooms that were inactive... but in that case, the close messages should all be posted at the same time.

I did a search for the word "automatically" to see all of the messages about the room being frozen and I found something really odd... 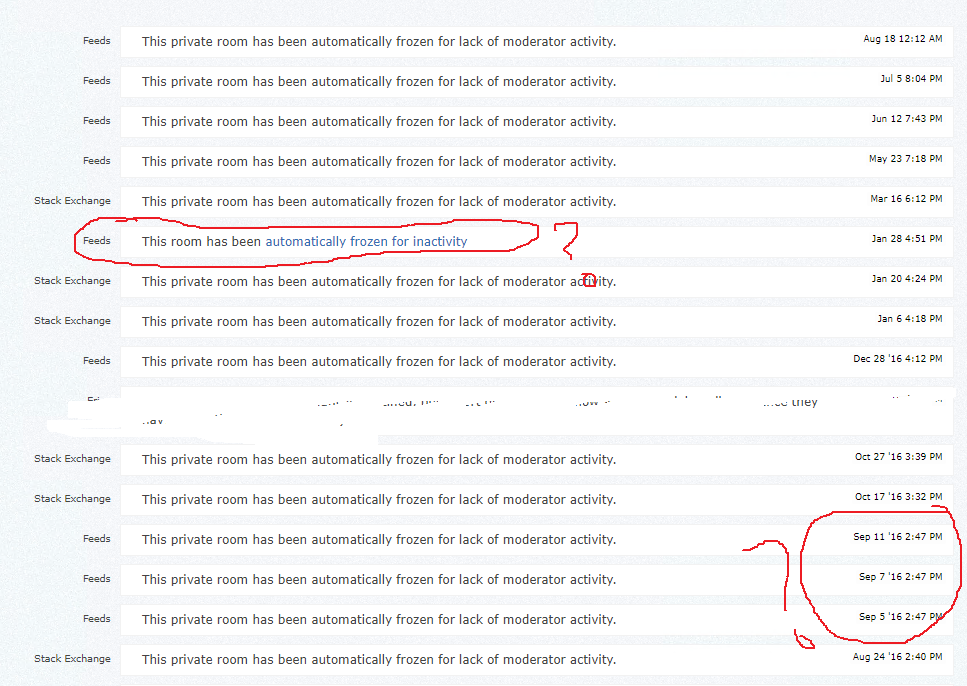 What you can't see in this image is the comparison between what time the last message was posted and when the room was frozen. Sometimes it was a delay of seven days and an hour or two or four or six... but sometimes it was almost a full day "tardy", if you will.

If you do the math, which I did with a neat widget I found, you get a difference of 7 days 16 hours and 3 minutes.

I'm starting to think I see feet behind the curtain... can it be?

The script that freezes inactive rooms (and deletes inactive rooms if they haven't gotten much of any activity, ever) runs once a day. So if a given room hits the threshold for culling 1 second after the script runs, it'll get very nearly a full extra day of not being frozen before the job runs again and catches it. That explains most of the timing issues you've observed...

The script always does its dirty work as user #-2 (unless a chat dev runs it manually, but that shouldn't happen much). User #-2 is currently named "Feeds", but it could be named "Stack Exchange" or "Ax Man McGee" if some snarky moderator decided to name it such. Given this user is also used as the default for posting feed messages into rooms and introducing the context of comments moved to chat... You shouldn't rename it. But if you did, and it stayed renamed long enough to freeze your room... You'd forever see the action under that name in your transcript.

That just leaves the rules for various types of culling. First, to be eligible for culling, a room has to meet one of the following conditions:

Of the eligible rooms, the following forms of culling may be applied, in this order:

Note that unfreezing doesn't count as saying something... So if you unfreeze a room and don't post anything, it'll get frozen again within 24 hours. And if a room containing only moderators gets frozen for lack of mod activity (7 days since last message) and a moderator unfreezes it 7 days later (now 14 days since last message), it'll just get frozen for general lack of activity the next time the script runs (again, within 24 hours of you unfreezing it).

I believe this should explain everything you've observed, with the exception of the feet behind the curtain. Ignore those.

While there are some numbers that deviate from the pattern slightly right around the beginning of the year, all of the rest of the numbers form a nearly perfect line with a trendline with an R2 value of 0.97.

You can see this more clearly when I remove the three events in December and January... because even scripts get a bit lazy during the holidays.

So, given this, it seems safe to assume that there are no feet beyond the curtain, merely a drifting script.

Not the answer you're looking for? Browse other questions tagged support chat moderator-tools frozen-rooms .

147
A guide to moderating chat
25
Don't freeze a chatroom soon after a mod has unfrozen it
-11
Can this note be changed: "This room is frozen; new messages cannot be added."?

131
Streamline moderators contacting users through chat
305
Moderators should be able to manually ban users from suggesting edits
4
Why are private rooms that are also frozen/deleted shown to 10k'ers?
58
Prevent exposure of messages from private chat rooms
4
Will frozen chat rooms be deleted?
275
Make moderator messages anonymous
6
Room is not frozen yet?
973
Firing Community Managers: Stack Exchange is not interested in cooperating with the community, is it?
25
What kind of unusual chatroom is this? It does not freeze