How come the Meta chat rooms are separate? [duplicate]

Like completely cut-off from the rest of the chat rooms (on the Stack Exchange network).

The favorites are separate, and the current rooms are separate, (even the search) - all of it; it's all really annoying. (I just don't ever visit those particular rooms.)

Sorry if this came off as a rant, not so at all. I am just wondering why it's like this.

Here are some examples:

• Starting with the domain: https://chat.meta.stackexchange.com/

Within a room, I don't have access to my other active rooms: 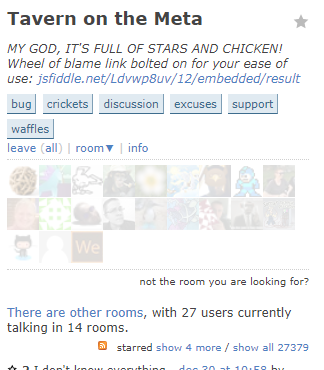 In all my rooms, I have access to other rooms I'm currently in, I can see all my favorites (no matter the site - besides Meta.SE), and I can search for any room as well. (besides Meta.SE)

Is this done on purpose? If so, what are the cons of having it the other way, etc.?

Where you're a moderator determines your ability to access certain rooms. Private rooms (moderator rooms) can only be accessed without special permissions if you are a moderator on the site/server the room exists on. Unparented private chat rooms (on the chat.SE server) can be accessed by all users with diamonds.

When it comes to Chat.Meta.SE, the staff use this separation to have super secret rooms where magic happens... mostly discussion of waffles, I assume. As you can see, this is confirmed by a Community Manager here:

Also of note that chat.meta has a bunch of internal, very active staff-only rooms that'd have to be migrated if that occurred. Merging them is not a particularly simple task only due to the appearance of it being less active. – animuson♦ Jun 17 '17 at 23:11

Though, despite my initial assumption that these rooms would be accessible to anyone with a diamond on the server, the reality is that staff have special access on their accounts that lets them get into these rooms. Merging wouldn't be impossible but it would be complicated and (my guess is that) there are more pressing things to handle.

In addition to these staff-only rooms, the CMs will occasionally use the Chat.Meta.SE server to have private conversations with users. Because the private rooms on the other two servers can be accessed by the site mods there, these rooms can't be completely "private", as the mods could find them at some point.

While rooms can be re-parented to other sites on the Chat.SE server under certain conditions (including SO and MSE), this isn't changing their server, which is impossible.

As to why it is this way, there was an intention at some point of creating a separate chat site for every network site. This was long ago:

At some point, we decided that not every single SE site needs its own chat site; it's much nicer for the community to gather on http://chat.stackexchange.com. This was also in the very early days of expanding the Stack Exchange network via the Area 51 process. The very first SE 2.0 site (Web Apps) was launched around the same time as chat.

Note, "chat.meta.stackoverflow" is what we now call "Chat.Meta.SE". This was, as you can read, abandoned, instead favoring having a single chat server for all network sites other than Stack Overflow and Meta Stack Exchange.

Meta has its own server. SE also uses chat internally, and since only CMs and staff are mods here, it gives them a way to do internal chat privately (and lets be honest here, SE chat's kinda the best in many ways!). SO also has its own seperate chat server.

I also half suspect this also lets them deploy to a quieter server, with fewer and louder people before trying new builds on the much busier chat.so and chat.se servers.

Not the answer you're looking for? Browse other questions tagged discussion support chat meta .

5
Why does Meta Stack Exchange have its own chat server?
18
What is the point of the “Parent User” in Chat?

814
The Many Memes of Meta
775
What are the badges I can earn on each site, and what are the exact criteria for earning each badge?
414
A site (or scraper) is copying content from Stack Exchange. What should I do?
163
Flags in chat are defective by design
56
Prevent exposure of messages from private chat rooms
322
Toward a philosophy of Chat
2763
A Terms of Service update restricting companies that scrape your profile information without your permission
376
If you're gonna talk Politics, you must respect those who disagree
2376
Firing mods and forced relicensing: is Stack Exchange still interested in cooperating with the community?