Where should I use Blockquotes?

Many peoples told me not to use block quote everywhere. I should know where to use this tag. Yeah, I have asked them to tell me why it is used, but they didn't give me an answer.

So, I have searched in the meta, but didn't get any answer. So, I have did this question. I've seen many people use that for important long text, specially for explaining of any method or function.

Noticing that, I also started using. But some said don't use for it.

Please tell me where to use it.

Where to use a Blockquote?

It's called a "quote" for a reason.

You use it when you're quoting something.... mostly. And how you use it will depend to some degree on the site you're on, so if you see them using it in a way that's not a quote, check in to see if that's standard for them on their meta.

So, if you're answering a question and quoting a resource, you put the quoted text in a quote box and then you attribute the text to them, usually by linking directly to the website you got it from or, if it's in a paper book, note some bibliographic info.

Q: Is is bad practice to use the blockquote syntax to highlight a tl;dr?

A: Yes, it is bad practice. Use either boldface or headlines to highlight TL;DRs. Use blockquotes only for text that could have otherwise been set in quotation marks.

Sometimes, answerers will use block quotes to quote the person asking the question.

Many peoples told me to don't use block quote everywhere.

That's correct... only use it (usually) when you need to. It's not designed to be used to emphasize text, it's for quoting it to show that it's not original to you.

On some sites, they will use quotes to show how to say something... this happens often on our language sites. So, if you're asking how to phrase a question, I might suggest:

When you want to ask for help in this matter, say something like:

I've been told that block quotes shouldn't be used everywhere. Where should I use them?

This isn't a direct quote but it's example text, so it makes sense here... and note that I've used the box twice... the entire example is in a quote area and the example sentences are also in one of their own, which is inset.

Some will also use quote boxes for technical reasons. Images of something on this site will often blend into the post content. Putting them in a block quote will set them apart from the body of the page and make it easier to tell the posts apart. 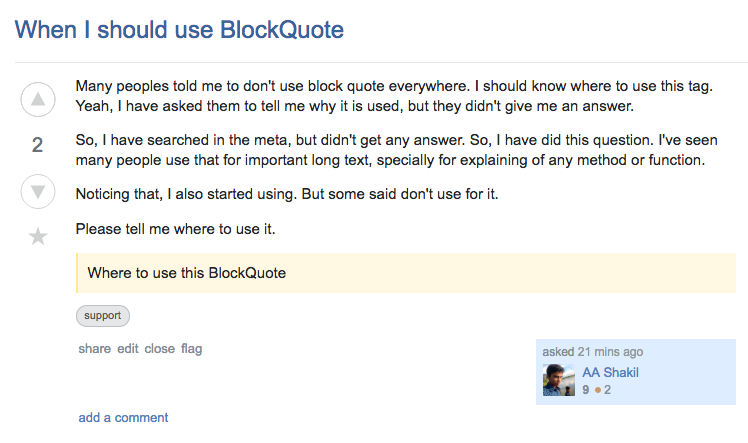 See how the second one blends into the page layout? It can get a bit confusing. When I first saw people using quotes this way, I was concerned, but once I realized how much it helps readability, I agree that it's a good use.

As I stated before, there are probably some other edge uses for block quotes that I'm missing but restraining your use of them to these four situations will probably prevent you from annoying anyone unnecessarily.

Not the answer you're looking for? Browse other questions tagged support markdown blockquote .

0
Blockquote tags are not visible when looking at your own answers, though the preview shows them
2
Problem with BlockQuotes in Answer Editor
27
Alternate (visually distinguishable) blockquote style
10
Do we need a new Markdown formatting for indented / boxed text (for preambles, remarks / side notes, postscripts, footnotes, …)?
25
Allow sourcing in blockquote markdown
126
Please revert the quote background from white to yellow
580
We're switching to CommonMark
744
New Feature: Table Support