Getting "Love this site?" banner even though I'm already subscribed to the newsletter

I'm subscribed to the newsletter, and getting it every week just fine. (MSE in this case, but pretty sure the below happens on all sites.)

However, now I noticed the "Love this site?" box for the first time since subscribing to it, which shouldn't appear since I'm already signed up for it.

Clicking the "Sign up for the newsletter" button throws an error: (no surprise there) 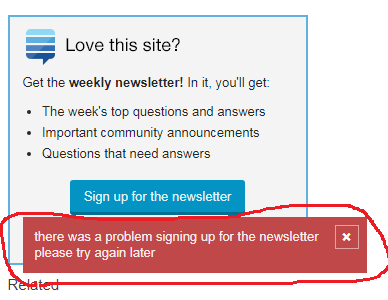 Can the previous behavior please be restored, so that the banner won't show when already signed up for the newsletter?

Wheeeee, this was a hard one to track down... Essentially this is a long standing bug related to ad caching that was exaggerated by another bug in the newsletter ad rendering path. It manifested itself when there is a race between anonymous and registered users.

That meant that when an anonymous user visited the site (and the cache was not primed) the HTML would incorrectly contain the newsletter ad and it would subsequently be cached under the key for unsubscribed users. When an unsubscribed registered user came along it simply rendered the previously cached HTML.

In the rare case that an unsubscribed registered user came to the site (and the cache was not primed) then the correct output would be displayed.

That HTML also had a URL to a specific user - the user that hit it with an unprimed cache. Clicking subscribe would attempt to subscribe using that users identifier. Fortunately the backend prevents such shenanigans - hence the error message.

Not the answer you're looking for? Browse other questions tagged bug status-completed newsletter .

32
Weekly site newsletters?
15
Don't send all newsletters on the same day
15
Please fix the minor glitches in example newsletter
112
If I can't flag a post, don't wait until after I've typed an explanation to tell me so
6
Pressing back and forward buttons when reviewing leads to weird behavior
31
Option to add a Stack Exchange Login to Existing Account has gone AWOL
9
Newsletter "Love this Site" header graphic still in English
8
Two ways to join a community; why is one more complex than the other?
580
We're switching to CommonMark