Translations are not used from Transifex for localized sites

Probably this current question has the same root problem as another of my recent reports Already translated strings have lost their translations. However, now the affected strings in Transifex have already been translated (some even a couple years ago), but are not being used on the site. E.g. on ruSO: 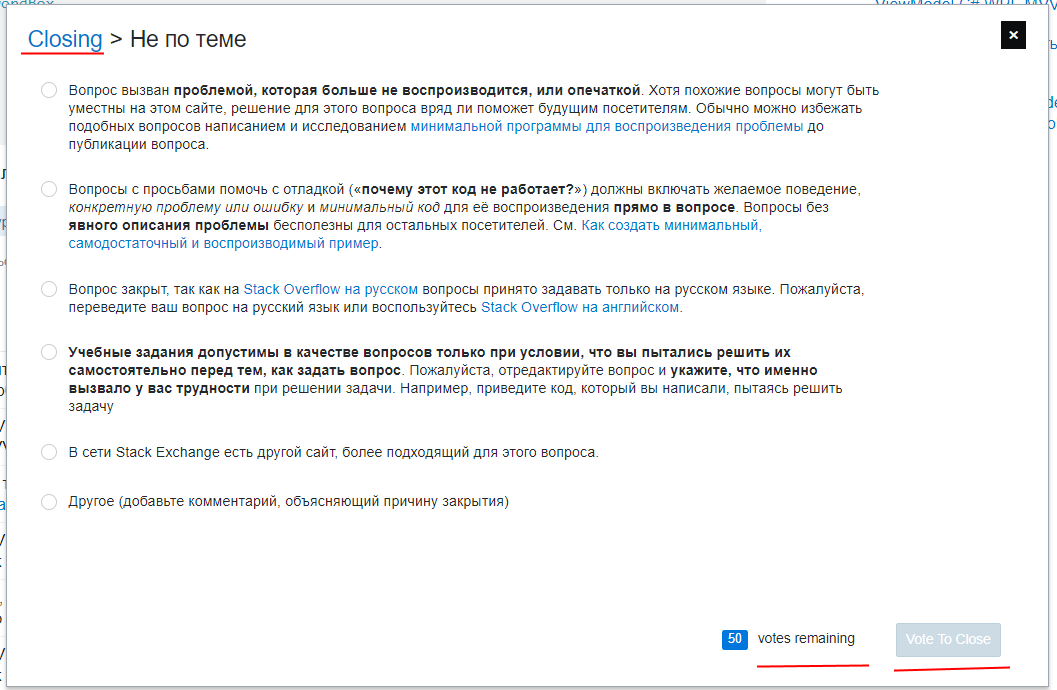 For instance "Closing" was translated 3 years ago and previously was used on the site.

Is there some issue on the Transifex side?

It would be good if someone can confirm if the same behaviour is happening on other localized sites like SO on Portuguese, Spanish or Japanese. I don't have enough reputation to test closing question on these sites. Probably the other strings might be affected.

This was fixed in the suite of changes that went out on Feb 7 as well. This was one of the cases where the string was genuinely flickering, because of the setup of our localization pipeline, which was an unholy messy.

Effectively, the string variant calculations didn't happen at build time, but relied on a dump of all the variants from a previous build. That dump lived on a network share, which grew to be quite substantial (several 100GB of per-dev-build-per-language files with hash+variant combinations, basically everything you have on Transifex, per build), and the sync started to get flaky. This got changed, so that variants get calculated directly, in one place only, and the dumps are only copied to the network share in case we need to do any diagnostics, but are otherwise part of the particular build's artifacts, so that they are copied to all the servers (they still need that file for interaction with Transifex).

Not the answer you're looking for? Browse other questions tagged support bug status-completed localization transifex .

761
Which tools and technologies are used to build the Stack Exchange Network?
826
What are the badges I can earn on each site, and what are the exact criteria for earning each badge?
11
Transifex string "Member for" in the profile page
5
Names of votes for undeletion and reopen are not localized
9
Localization for footer
3
Census badge description is not used in localization engine
11
Already translated strings have lost their translations
582
We're switching to CommonMark