No, we're not going to survey a survey, as much fun as that might be. We'd like to toss out the idea of running a survey that asks folks about their experiences here, expectations when coming here, and whatever else they'd like to add.

This was brought on by an idea some users had surrounding an unofficial survey that was being shown to folks that appeared to be in the wrong place by coming to meta. While it's nice to know how folks occasionally get lost, we thought it would be a better idea to take that energy, give the end result more breadth and usefulness, and see if we can find areas where we could make some small improvements that might lead to a larger impact.

It's important that all of us, occasionally, see some new faces with 1500 or more rep starting to chime in. That means new folks are coming in to fill the spaces left by those that have done, well, basically all they came here to do.

So, some early specifics (this is still just an idea at this point, although it looks like an idea that's easy enough to go with unless anyone can bring up a good reason not go proceed):

That keeps it pretty simple. We could re-use some stuff we've already got in our testing facility to prompt folks to take it after their first interaction here, and folks could use some excruciatingly polite canned comments that we provide to ask others if they'd be interested in participating.

So, what do we hope to learn through the survey?

As I noted initially, expectations that folks have when coming here are the primary and most interesting thing to learn, as well as the hardest to guess in some cases. It will also give us an opportunity to hopefully hear more from those that come here, get frustrated, and just never come back again.

Sure, we want to find out how folks end up in the wrong places (we're sure we can confirm it's accidentally-ooops-on-purposely-ish), and while that's good signal to have, the usefulness of it is quite limited. What's most useful to determine is what might be keeping folks that ask a few good questions here from asking (or, better) answering dozens more.

And, what do we hope to get from this post?

We want any ideas you have surrounding:

We'll take care of the more rote questions (expectations vs what happened, how happy are you with [x] on a scale of 1 - 10, etc) - but notes on stuff we should take care not to forget would be appreciated.

Thanks for your time, and anything you've got to share!

I sometimes see both new and experienced users who are confused about the differences between per-site metas and MSE -- where should they post their question, should they be redirected, why is Unicorns.SE linking me to a FAQ on a completely different site to answer my question, why did my bug report that the people on Unicorns.SE told me to post here get 15 downvotes, etc.

I'm not sure what the best way to poke at this is, but I'd like to try to do something.

Just to provide some context here: I was the one who came up with the idea for unofficially surveying users who post off-topic questions here on Meta. The original push came from a desire to keep my answer here about why people post off-topic questions here up to date. While there was some backing from an SE employee there, it was still mostly conjecture, and I wanted accurate data.

At first, I simply began commenting on those questions, "out of curiosity, why did you post the question here?". I got some responses to my comments, but as I'm <10k I couldn't see those responses as the questions were being deleted (correctly). So I decided to create a survey, and link to it in my comment, so people could respond there and I could see the responses. 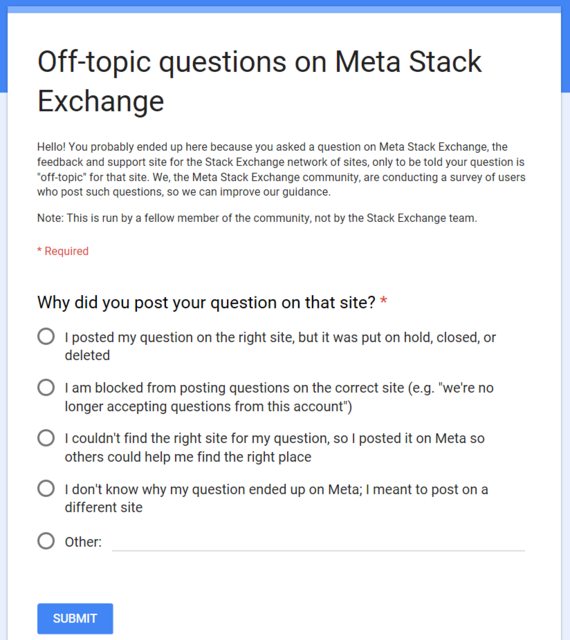 I do agree that we should start a survey to not only determine this, but also determine why people who post good, on-topic questions hold off on making even more such posts. But it would be great if I got good data to update my answer above.

Not the answer you're looking for? Browse other questions tagged discussion meta user-experience .

25
Why do users often ask blatantly off-topic questions here on Meta?
18
Survey of users to judge quality and culture of an SE site
14
Conduct a [survey] about tags on Meta
13
How should we steer lost users?
8
Could we change the tag excerpt/wiki and clean up the [survey] tag?

928
Why aren't people voting for questions?
1845
Could we please be a bit nicer to new users?
730
Your answer is in another castle: when is an answer not an answer?
2793
A Terms of Service update restricting companies that scrape your profile information without your permission
829
Net Neutrality and Stack Overflow / Stack Exchange
2513
Firing mods and forced relicensing: is Stack Exchange still interested in cooperating with the community?
720
Dear Stack Exchange: a statement and a letter from your moderators
2269
Stack Overflow is doing me ongoing harm; it's time to fix it!
1567
Thank you, Shog9