When a mod moves comments to chat, an entry "Mod Moved Comments To Chat" appears in the edit history (revisions list) of a question/answer (Example).

I believe it would be useful if a similar entry appeared when comments are deleted by a moderator, so that one can review in detail what happened to a controversial post. The entry would only be visible when one is inspecting the edit history, so it is not very intrusive.

I delete possibly more comments on a daily basis than most moderators, so I'm going to talk a bit about my experience.

Interpersonal Skills has a very strict comment policy - though, we're merely codifying and enforcing Stack Exchange policy regarding comments. As such, comments are flagged and removed at a rate of about 1000 per month.

There's (at least) one major flaw with your proposal. It's only one-way accountability. You're asking the system to finger a specific moderator (though even if it was merely a generic "moderator" it'd be the same issue) for doing their job without showing the actual content that was removed, which often would make it apparent why it was removed. Without two-way accountability, a lot more accusations of abuse are likely.

I see that there are 20 deleted comments here - why? Moderator X is ruining the community connection on this site by clearing out comments! Y'all get your torches and pitchforks and let's tar and feather them at the stake!

It's one thing for the person who deleted the comment to ask for help understanding why their own comment was deleted or for the OP to ask what the comments they were notified about had said. These users are aware that the comments were removed and if they want to know why, I'm happy to explain...

... but... I see no benefit in responding to idle curiosity that only exists because we have told them in the UI that a bunch of comments were removed. And they will ask. Even if it's not out of concern of moderator abuse, someone who has only ever looked at the post once will see that number and ask "what were the deleted comments here?" or "why are so many comments on this post deleted?". Responding to these curiosity questions takes time away from actual moderation work.

So, we either dupe close them on meta of a generic "why were comments removed" question (if the question was asked on meta and not as a comment on the post), or we ignore them entirely and then risk being accused of ignoring our duties in explaining our actions - which, in this case, comes from users misunderstanding what comments are for (see below).

When I delete 100+ comments from a question (or even just one), I do so for a very good reason, not because I feel like it. Often, in fact, we already post comments saying something like

Seriously, y'all... the answer and joke comments need to stop. We've deleted nearly 80 comments from this question talking about wasting paper, Anne being overbearing, and how infinitesimal the amount of power being wasted is. It's been said already and deleted. Stop it. If your comment is not asking for clarification, say it to yourself and move along.

Though more often that not it reads something like:

{COMMENTS REMOVED} - If you have an answer, write an answer in the answer field below. Answers written in comments will be removed.

Note, if you visit that question, there are two notice comments telling people not to post answers as comments (including the one I've quoted) plus two explaining commenting policy... and 110 deleted comments. 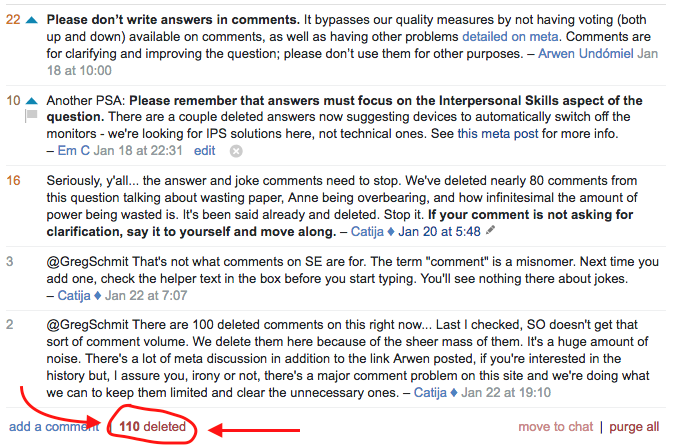 We're not strict about comments on our meta site as meta is more about discussion.

I'm going to go off on a bit of a tangent because I think this is a concept that not everyone understands...

Why do comments need to be deleted?

Part of what causes this is discussed by Robert Cartaino on this MSE question: Fixing comments in 5 minutes. Intrigued? Let's discuss

The word "comment" is a misnomer for what the intended purpose of this feature is. Comments are specifically designed as a place to ask for clarification or suggest improvement. In Robert's words:

Comments are something else. We have a section inviting folks to simply "add comment" (definition: respond? gossip? talk?), and yet we yell at them if they do it wrong. Then we spend an inordinate amount of time (and resources) cleaning them up (with barely a dent, I should add).

Comments actually have two primary use cases — to ask for clarification or to suggest improvements to a post.

This is made clear in the comment use privilege explanation page on any site:

You should submit a comment if you want to:

Comments are not recommended for any of the following:

Note that the second point in the "When should I comment" section may be a bit confusing... this is the "suggest improvements" part. These suggestions for improvement shouldn't turn into a multi-comment discussion/argument between users... if they do, it should be taken to chat or removed if it's not serving any benefit as mentioned in the "When shouldn't I comment" section.

So, because users think that a "comment" is "anything that comes to mind in relation to this post", they frequently feel that any removal of comments is unwarranted. In fact, the opposite is true.

Comments are for such a specific purpose that a very low percentage of them actually belong on the site and once acted upon, even those comments should be removed. Comments are noise and the more of them there are, the more there is coming between the person who has a question (not only the OP) and the solution to their problem.

This is particularly problematic when the comments appear on the question, as they appear before the answers. Add to this the fact that comments can only be voted up, you are treading in dangerous water of bad advice that merely sounds good to some people (who have upvoted the comment).

So, my argument is

Until people are actually using comments for their intended purpose (or understand that purpose), all that something like this will do is cause annoyance to moderators who have to deal with accusations of "mod abuse" for deleting comments the user may never have seen.

The inevitable answer to "why was this comment deleted" is nearly always "because it was noise".

While total mod open-ness is something I love - ... no plan survives real people. While not as serious as mod messages, I see two issues here.

Firstly, mods delete a lot of comments on some sites - while my own site is quiet, we do occationally get clusters of trivial, old comments -or just go "eh, I'll delete the lot and restore the good ones" as suggested here. Considering comments are kind of meant for clarifications and such and to me transient by design, not sure a deep/specific public audit thread helps anything.

Secondly, some people tend to take these things too personally, and will probably post meta questions, chat posts or worse, over something that ought to be a fairly trivial, quick moderation task.

If you can find a real, critical issue this fixes - maybe I might change my mind, but this smells like it would cause more problems than it solves.

Not the answer you're looking for? Browse other questions tagged feature-request status-declined revisions-list deleted-comments .

838
Allow an edit to notify downvoters: “I think I've fixed the issue now - please check”
192
Provide a tool for moderators to migrate comments to chat
321
Don't remove the @ part of my comment
416
Decision on rejected edits should be displayed as a notification to the editor
107
Please provide moderators with better tools for moderating users in chat
79
Show the post's comments on the “Suggested Edits” review interface
401
Add an “I don't understand” option for review audits
118
Make comment flags less stupid
91
Community deletion of comments should raise a moderator flag