I used to think that Sonic the Anonymous Hedgehog's idea of a survey was a terrible idea - it didn't actually fix anything, and I suspect most folks asking off-topic questions here are drivebys.

On the other hand, we end up closing a few questions a day from people wandering in lost, asking utterly off-topic questions, and it's at least mildly annoying. It is sort of a problem, at least in terms of noise. I sometimes try to point them to the help center and the tour page but I've occasionally seen people post different off-topic things twice. It would be nice to help them know what they're doing, even if we don't all the time – I mean people with no accounts elsewhere, or even people posting off-topic questions more than once seem fishy.

I'd actually like to suggest something that might work in the context of other sites as well. Throw users who meet certain criteria a single question with say 4 options, with answers somewhere on the help.

If a user has no accounts elsewhere or has a question previously closed for an appropriate close reason (not being about the SE network) – triggering such a test makes sense.

I'd suggest scaling it if there's more than one closed question with no accepted questions. Maybe one additional question for each additional closed question. It's also likely slightly less painful and more annoying than a post ban, but I'm not sure if that's good or not.

It'd be zero friction for a new user, and only affects users with no real reason to be on meta (unless they somehow have issues registering at all, and doesn't throw a big barrier of entry for an actual new user).

Depending on the criteria, it might also work on other sites as a means of quality control or simply in addition to captcha type stuff.

Let's use a question wizard (already active on Stack Overflow) here on Meta.SE. It would have one question: "Is your question about programming?"

We get a few of these per day: 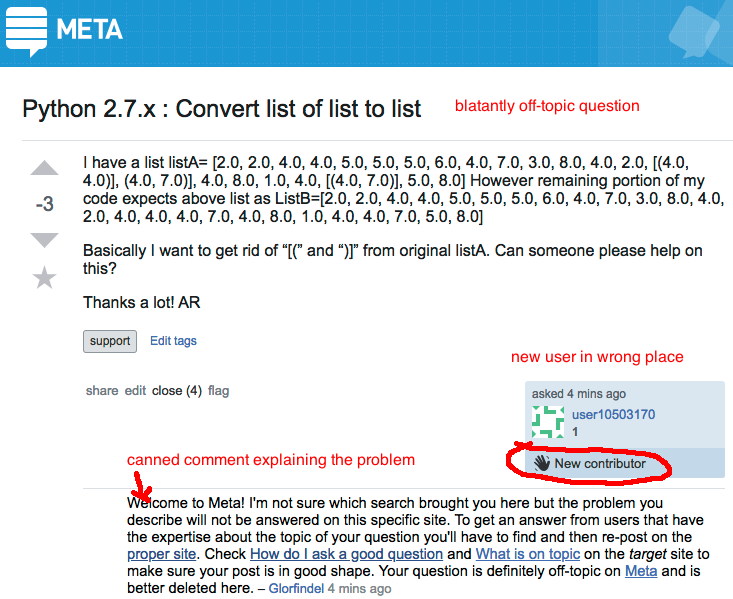 Aside from comments like that we can't do much to steer these people to the right place. We close and delete these questions quickly, so the users might or might not see those comments, but even if they do, the damage has already been done. Instead we want to prevent these questions, as this question points out.

Stack Overflow is now testing a means of preventing off-topic questions there. Let's do the same thing here. The SO question wizard asks a series of questions to weed out questions that don't belong on SO; I think a single question would catch most of these here, but we could add more filtering-out questions if we want (like "is this about something that happened on one specific site?").

I don't know what rules govern who sees the question wizard and who doesn't. But for a first test, let's use the code that's already been developed for SO, and either it will do everything we need or we'll learn from it more about what we really need, before developer time is spent on new rules. I mean, the ones in this question sound good, but let's start with something we could deploy tomorrow and see what effect it has.

How about this, as an in-your-face obvious prompt that you're in the wrong place: 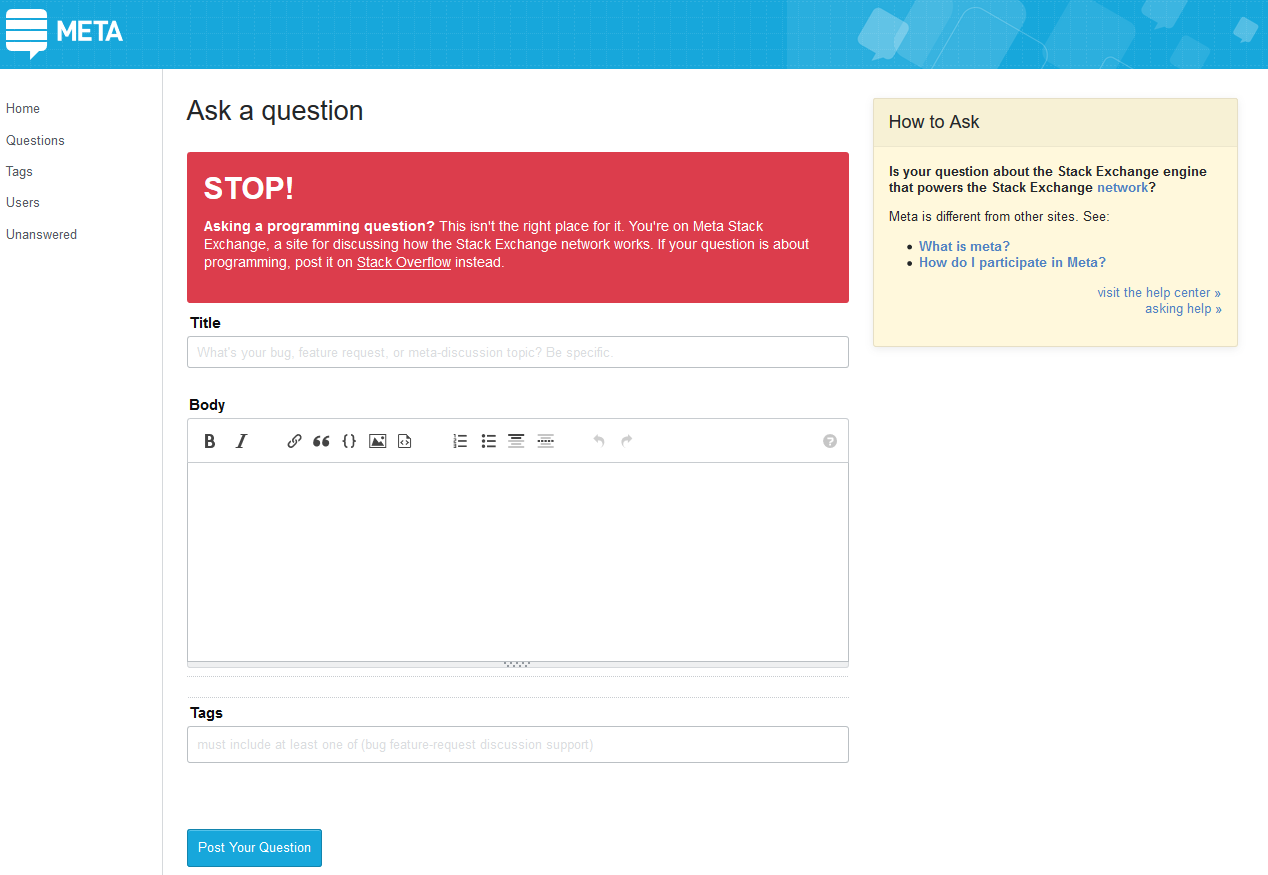 Should probably only be displayed for users under a certain rep score (5, perhaps?), since most off-topic questions are asked by 1-rep or low-rep users.

68
Magic wand time - what does your community need?
49
Could we get some troll fencing up around meta?
25
Why do users often ask blatantly off-topic questions here on Meta?
47
What is the cause of the recent increase in blatantly off-topic posts on Meta?
31
The question wizard might be useful for Meta Stack Exchange too; should we give it a try?
13
How should we steer lost users?
2
When does the question ban get applied?
-15
Downvoting off-topic MSE posts is counterproductive
11
Move the question/answer ban meta to per-site help
8
Off-topic questions from new, inexperienced users: How come?
See more linked questions

1852
Could we please be a bit nicer to new users?
609
Exit strategies for "chameleon questions"
337
Distinguish close votes by reason
451
Reward finding duplicate questions - +10, +2, -5
386
Send authors an inbox message if their question is closed
1256
Don't throw away all votes when a user is deleted
178
Shouldn't "off-topic" be only about... off-topic?
331
Stack Overflow is getting a Meta of its own
180
Usability issues for first-time Stack Exchange users - a micro-study