How to distinguish audits from real reviews in SEDE data?

I was trying to look at some statistics on review outcomes using SEDE, but hit upon a snag: apparently, the SEDE ReviewTasks table also includes audit tasks, and there doesn't seem to be any way to reliably tell them apart from real reviews.

If there is some way to tell which review tasks are audits in SEDE, please let me know how to do it. If not, could some way to do it (e.g. an IsAudit column on the ReviewTasks table) please be added?

(Before anybody asks, no, I don't think revealing this information via SEDE should be a problem, since there already exist much easier ways to automatically detect review audits if anybody wants to do that.)

Ps. Also, while I'm at it, is there any way to tell from SEDE whether e.g. a reopen review was triggered by an edit to the question or by an actual reopen vote? And if not, could that information also be added?

You have a high chance on finding audits by looking for those ReviewTasks that are completed by a single ReviewTaskResult AND have no corresponding posthistory event around that same time.

This query does that for audits in the close vote queue:

In the grand scheme of things I assume this deviation is acceptable. I leave it to you to adapt the query to work for the reopen queue.

For the specific case of "good post" audits in the reopen queue, I did manage to find a partial work-around.

There do seem to be a couple of gotchas, though:

Still, I did manage to implement this filtering, and it seems to be working. And the difference it makes is pretty striking:

All reopen review outcomes on SO: 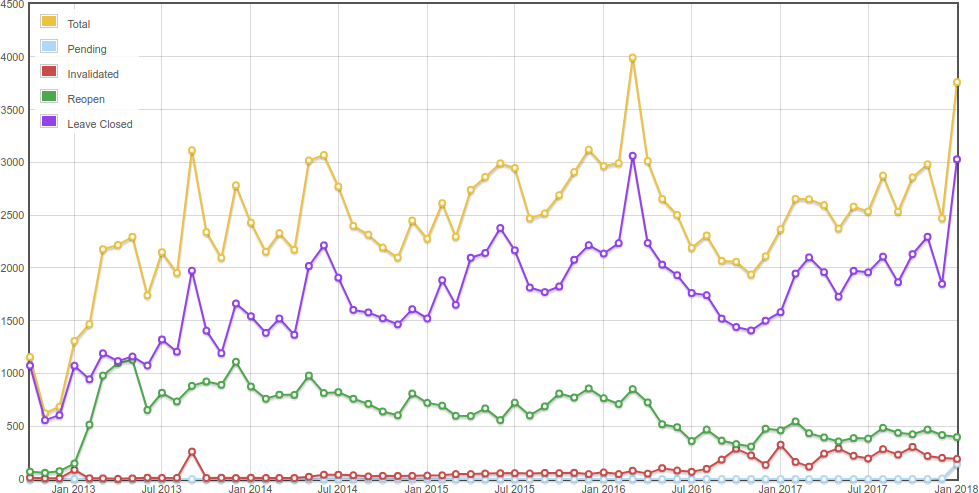 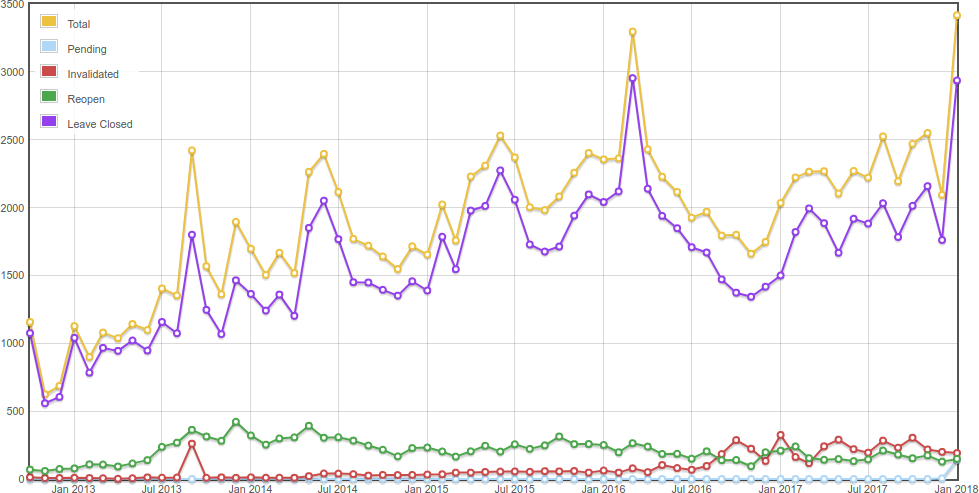 Of course, the second graph does have some intrinsic bias, since it still includes "known-bad" audits which presumably inflate the "Leave Closed" outcome count somewhat. It would be interesting to see the same results with both kinds of audits excluded, but I still haven't managed to find a way to do that. Still, just seeing that over 60% of all the "Reopen" outcomes in the past 6 months have actually been audits is pretty remarkable.

Update: I came up with a hack for heuristically detecting "known-bad" audits: on the assumption that people usually don't just randomly vote to reopen long ago closed questions without at least editing or commenting on them, I decided to exclude any review tasks where the question had no post history events or comments within the week preceding the review. I think this should do a half-decent job of filtering out most audits, although obviously there will be some false positives and false negatives.

(In particular, since the review task timestamps only have one-day granularity, a reviewer commenting on an audit question could often be enough to make the query think it wasn't an audit. I have not done any sampling to see how widespread such errors might be.)

I also excluded reviews on questions that had been deleted before the supposed review took place, but this alone seemed to make no noticeable difference. Apparently, deleted questions are not normally used for "known-bad" reopen review audits.

Surprisingly, excluding the known-bad audits eliminated most of the seasonal spikes noticeable in the graphs above:

Reopen review outcomes on SO, (hopefully) excluding most audits: 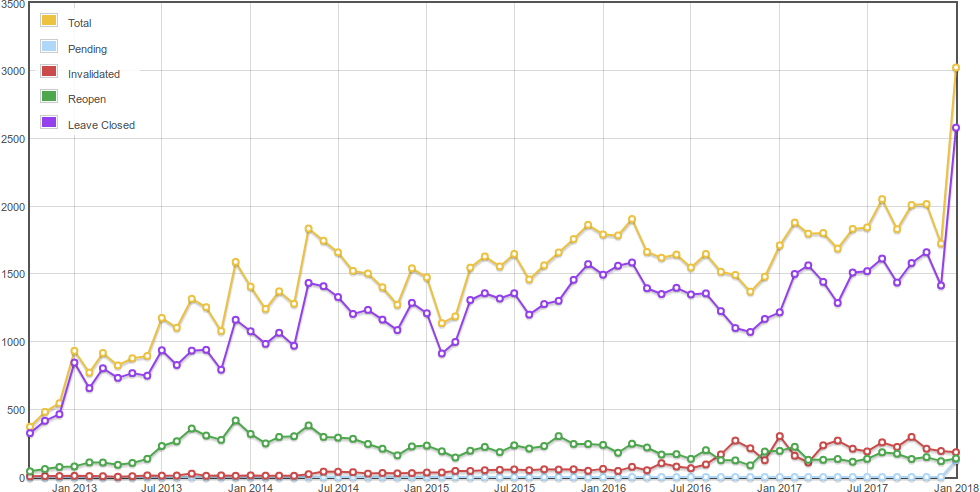 I'm not sure why reopen review audit rates should have peaked every 10 months or so between 2013 and 2016, when the filtered audit-less reopen review rates show no such cycle, but that's what it looks like based on the graphs. Weird. Of course, it could be some error in my queries, but if so, I can't figure what could be causing it.

Not the answer you're looking for? Browse other questions tagged feature-request support data-explorer review-audits .

17
Why on the client side there is a field called "isAudit" when reviewing?
5
Get a list of audit reviews for each review queue

353
Database schema documentation for the public data dump and SEDE
355
What are review tests (audits) and how do they work?
211
Stop using real accounts in suggested edit audits
9
Are there actually review audits for the close vote queue?
416
Add an "I don't understand" option for review audits
42
Why doesn't attempting to edit count as a pass for a review audit?
54
Please add close flags, duplicate links and review data to the public data dump