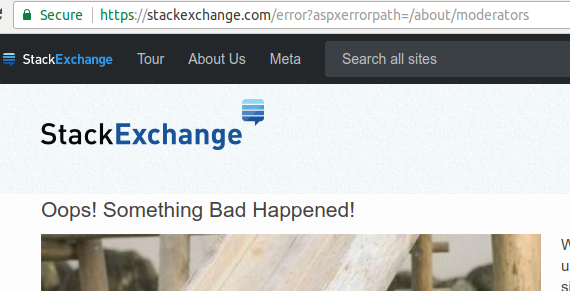 While this isn't the highest traffic page, it's still interesting info and I'd like to be able to see it.

Well this was fun to debug. I changed this recently from a ton of API calls to direct DB queries as part of a massive HTTP overhaul we're doing internally (moving internal traffic to HTTPS).

In the method, it's now a Parallel.ForEach fetching many site moderators at once (we need data stored in each site's database). 3 methods down there was a "current context" access, which looks at, ultimately, the current request. This doesn't work in a background thread.

"Hey Nick, why don't you test your damn code?" Well I did, but locally and in dev (not visible to the public), there is at most 1 site in the loop. In .NET, a shortcut happens on Parallel.ForEach where it doesn't need to allocate all the sharding and parallelism bits...so it just runs on the current thread. Because of that, the "current context" access was fine. When it got to production with hundreds of sites: boom.

So, sorry about that. A fix has just finished deploying and all should be well.

Not the answer you're looking for? Browse other questions tagged bug status-completed stackexchange.com 500-server-error .

514
How about a “Vote not to close” option to counter the “Vote to close”?
197
Avoid the Streisand Effect - be clear about the reason when suspending an account
2
Posting questions/answers and editing does not work with Iron 3.0.197.0
3
StackExchange broken for new user?
8
Can closure and deletion stats be added to the admin analytics or 10k tools?
140
Full list of Moderators
18
Unable to ask a question on Stack Overflow
273
Make moderator messages anonymous
689
Dear Stack Exchange: a statement and a letter from your moderators