The tag character limit was supposedly increased from 25 to 35 characters "on all sites". However, here on MSE, the tag length increase was not actually implemented.

As would be expected, you get an error message when you try to create a tag that is longer than 35 characters:

That example was 38 characters; you might be thinking that that error message is just a typo. But it's not:

This one is a mere 29 characters.

Also, the "How to Tag" box on the right still also says "25 characters": 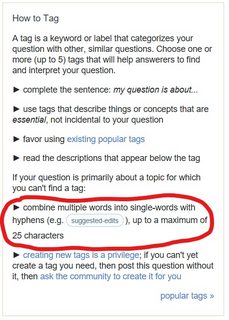 Is it intentional that the tag length limit hike was not supposed to be implemented on MSE, or is this a bug?

There were site-specific overrides on MSE, MSO and Stack Apps... These predated the existence of logging for such changes, so I've no idea why they were customized, but there's no obvious need for them at present so I've reverted them to the network default (35 characters).

Not the answer you're looking for? Browse other questions tagged bug status-completed tags meta character-limit .