When we look at statistics of any beta sites, some stats will be displayed. The stats are displayed to reflect the health of the beta like Needs work, Okay and excellent are given. It is believed (not sure) that the stats are also one of many factors considered while considering a beta site for graduation. One of the stats give the user base of the site.

Every site needs a solid group of core users to assist in moderating the site. We recommend:

We can think of the need of 2k+ users. When the site graduates at that moment, they have edit privileges and review suggested edits and assist moderators according to the rep boundaries of a graduated site. Similarly, 3k+ users have access to all the review queues and participate in review queues. At 3k, they get to cast a close/reopen vote. So, those 5 users can close and reopen without a moderator intervention.

What is the role of 200+ users (avid) in assisting moderation? There is new privilege at 200. All they can do is vote and flag which are earned at 15. Besides these, they can suggest edits for which they can do it from day 1.

So, what is the logic behind adding 200+ rep users in the beta stats? Why do we need 200+ users in a beta site with respect to moderation? Also is my reason for 2k and 3k users correct?

You need warm bodies on a site... period.

A site that only has 15 people using it is... sort of pointless and possibly not really worthy of graduation. Having some chunk of users with a level of minimal reputation means that there are actually people using it and they will become the voting base for elections (at 150 reputation).

As such, this stat seems largely pointless in relation to graduation.

It becomes even less so when you consider that, with the release of Design Independent Graduation, the reputation levels don't increase when the site graduates and these stats existed before this change.

The most notable reference point for 200 reputation is the Association Bonus. At 200 reputation, we trust the user enough to give them a 100 reputation bonus everywhere on the network. As such, despite there being no additional privilege granted at 200 reputation, it is an important rite of passage for a user.

Is this stat useful, though?

Earlier I note that this stat seems pointless... I would hope that you could argue that any site that maintains 10 questions per day (the primary goal for graduation) will surpass this goal easily and that, if it does not, there's a major failing of the active users of the site to actually vote on content. When a site graduates in the "target" of 90 days, those 200 reputation users are probably still pretty close to being active...

However, when a site takes 2-3 years or longer to graduate, the opposite is the case. Only the most active users are around and there are few users available to actually run the site and, when this happens, you don't have users willing to run in the site's first moderator election or to vote in it, and you rely on a core of very few users to actually keep the site afloat.

This is dangerous and is a real problem! As such, it might be worth considering how recently the reputation was earned when assessing the sites' ability to maintain themselves once graduated.

A site recently graduated. These were the stats: 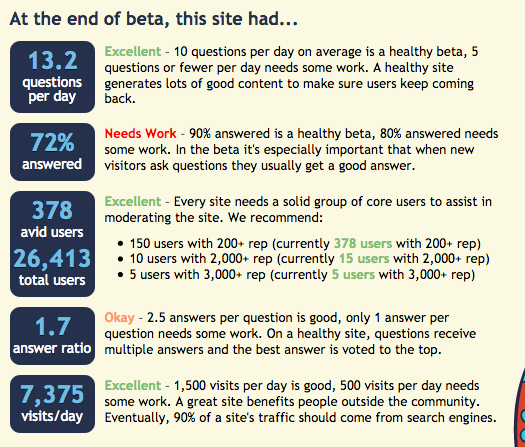 So, despite having a very low answered percentage, low answers per question, and barely meeting the avid users stats (these numbers are after three years in beta)... this site was graduated. Upon starting their graduation election they had insufficient users interested in running in the election, and so it was cancelled.

Now the future of the site is somewhat unknown. This ... is not good. These stats are supposed to ensure that a site will be successful when it graduates... and yet, despite currently sitting at 20 questions per day, this site is in trouble because it doesn't have enough active users.

So, yes, this stat is important but I don't think it's being assessed correctly, since it's all-time reputation rather than something more like last 180 days.

A site needs sustained activity over the long term. Further, it needs enough participants with enough activity to form the core of the site's memory, meta activity, and maintenance.

Most users, on any site, are drive-bys -- they had a question, got an answer, and left, or they visited via Hot Network Questions, created an account so they could cast a few upvotes, and then left. These users are not building the community -- and that's ok! Most beneficiaries of a site are not building it, by design.

But that means that just looking at the number of users is useless. Instead, you need to look at users with more involvement. While it would be better to count users who have done something on the site periodically (posting, commenting, editing, voting, etc), that's probably a messier problem. So instead, SE uses reputation as a measure of the number of users who are more engaged with the site. 200 rep isn't necessarily a lot of engagement -- that's why they're looking for so many of them -- but it's enough to show a prospect of that engagement. 200 rep is also enough to vote in moderator elections when they happen, and being able to support an election is one of the criteria for advancing out of beta.

With sites staying in beta for a long time, approaching a decade in some cases, we should probably be aging out that rep somehow, as noted in this answer. Somebody who earned 200 rep 6 years ago and hasn't been back since is not a avid user, though he once was. It would be better to consider other activity as I suggested earlier, or only count rep earned within the last (say) year and, probably, directly on the site (excluding association bonus).

I suspect its a vaguely arbitrary number. On a mature/older trilogy site, 200 reputation is kind of the point where someone is considered an "avid user" - essentially enough that SE stops showing some ads and they're likely not someone who's a driveby user- well, not one that hit a HNQ lottery or isn't John Carmack.

200 reputation in a year also means you're currently engaged - getting you an yearling badge. Your 200 rep users can vote and flag, which means you have, in a younger site at least a critical mass of people who can do the most basic of on the ground meta-moderation and are engaged by any metric.

Someone thinks 200 reputation is wonderful

While I suppose that on its own, it doesn't reflect current activity, that's where the broader spread of metrics - like QPD probably help, and is probably 'cheaper' to calculate than "user reputation over a year for all users with more than 200 rep for the whole site".

I view that particular bracket as more of a necessity for site activity, not necessarily for moderation. Most sites have a core group of users, who quickly accumulate the moderation privileges needed to keep the site reasonably clean. But when some sites enter into the period of quietude following the frenzy of a private beta, these users may be the community on the site. You'll have a couple dozen people asking and answering and closing and reopening and deleting and flagging and what-have-you. And the site stays clean.

But that's not a full-fledged site. Ideally, you have people working all the time in a number of ways to keep things running - not just on the moderation side. The site needs to live. You need people to vote, comment, edit, ask and answer. They bridge the gap between the core users and the folks who might come by and maybe post once or twice and leave. They stop the site from becoming a place for just a few folks, and make it a place for everyone.

That, I think, is the value of this tier of users. The unrecognized but essential denizens of any young site. Having this many people engaged at a non-negligible level - 200 rep implies at least a few posts, maybe more - really gives a site a good chance for survival. It's not moderation in the usual sense of the word; honestly, it's not really moderation at all. It's the lifeblood of the site.

I think people sometimes take this group of folks for granted. Maybe there's a philosophy that if you can get twenty people to do the high-level stuff, then other users will follow - the "If you build it, they will come" theory. But it's not true. There are plenty of sites that hit the other two user-level moderation marks but fail here. And those sites aren't all the way there yet.

Not the answer you're looking for? Browse other questions tagged support beta-phase .

502
What is the association bonus, and how does it work?

36
Can we grandfather in rep abilities as sites leave beta?
767
What are the badges I can earn on each site, and what are the exact criteria for earning each badge?
11
How are the “on pace for” metrics on Area 51 generated and are they being done so correctly?
157
What are the guidelines for reviewing?
397
Graduation, site closure, and a clearer outlook on the health of SE sites
6
Why is more reputation required to edit on beta sites than to vote to close?
2342
Firing mods and forced relicensing: is Stack Exchange still interested in cooperating with the community?