Stop advertising the SE app on the mobile site

If I visit any SE site on my phone, I get the following banner on questions encouraging me to download the app: 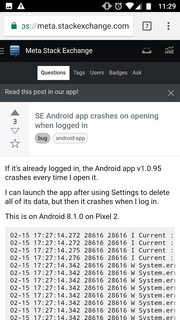 It is possible to dismiss this banner, but you have to do this for every single site individually.

The problem with advertising the SE Android App is that it is far inferior to the mobile site I'm already looking at. Right now, it actually doesn't work at all, it just crashes on start. This problem exists for at least 11 hours right now, likely for every user of the Android app. A problem like this affecting the actual website would have been fixed in minutes.

The app is essentially unsupported now, it lacks features compared to the mobile site and is just overall a much inferior experience. There is a single reason to use the app at all, and that is push notifications. SE never invested enough resources into the app to make it a good alternative, and I can certainly understand the reason why they abandoned it now.

I agree. I've gone ahead and disabled the app banner on all sites, hopefully temporarily until a point where we begin reinvesting dev time into the apps.

Sorry about the degraded experience, and sorry I didn't do this sooner.

Not the answer you're looking for? Browse other questions tagged feature-request status-completed android-app mobile-web .

852
Can we have the ability to retract a close vote before it closes?
11
Lots of crashes when viewing questions
16
App keeps crashing & rendering error since update to 1.0.68
580
We're switching to CommonMark
216
Deprecating our mobile views