I would wish to look at past bounties that had been started on a SE site. The purpose is to gauge their "success rate" i.e. how effective have they been in pulling required answers from the community in the past. This would help me decide how large a bounty to put and whether to even put a bounty or not.

I know that once a bounty period (7 days + 24 hour grace period) has passed, it is removed from the "featured" tab. Hence, I have been unable to view the bounties that had been raised, say, in the past six months. Is such a list possible?

The following query does that by looking at the votes table with votetypeid = 8 (bountystart). From there it is easy to join the winning answer.

When run today on Stack Overflow your result will look like this: 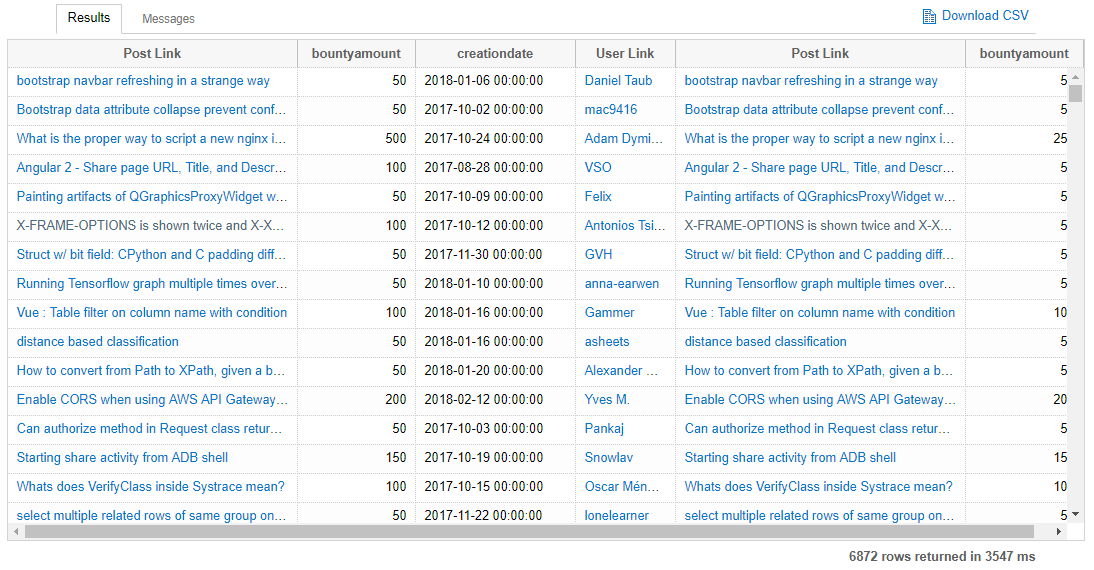 The first userlink is the user who offered the bounty, the second userlink is the OP of the answer that received the bounty. I included both bounty amounts as only 50% of the awarded bounty amount is given if the system selects the winner (instead of the user who started the bounty) in which case the second amount would then be lower.
In the votes table all creationdates are sanitized and have their time part removed so voters remain anonymous. This is maybe not needed for bounties but the rule applies to the whole table to prevent mishaps (the votes table also include up and down votes).

Keep in mind SEDE is only updated once a week, on Sunday.

Don't forget to check the awesome tutorial that learns you how to get the best out of SEDE.

16
Can bounties be awarded after expiration?
30
Bounty grace period shouldn't be there if no answers are posted
19
Questions with ended bounties are not being removed from the "featured" tab
9
Change the way expired bounties are shown in question lists
5
Please announce changes like the new design of the bounties
2
What can't I see the bounty on the answer?