I'm not that bad! Why can't I review?

I saw that there were suggested edits by the indicator by the bar, but when I tried to review I was told that the queue was cleared!

I thought that maybe the notification was old, due some caching issues. When I went to the main reviews page, however, I found this:

I refreshed both the main review page and the actual suggested edits page six or seven times, but I only got the empty queue page. The number of suggested edits even decreased in that time:

I was quite annoyed at this stage, and when I came back two hours later the same thing happened!

I don't know if caching can be blamed, as other people could review when I couldn't. No matter what is causing it, this is really getting on my nerves. I would be most grateful if it was fixed as soon as possible.

Is anyone else having similar issues?

Those are tag wiki and tag wiki excerpt suggestions, suggested by Jon Arndt. Those suggestions can only be reviewed by users with 5k reputation.

Since you don't have enough reputation to review those edits, they are not available for you. 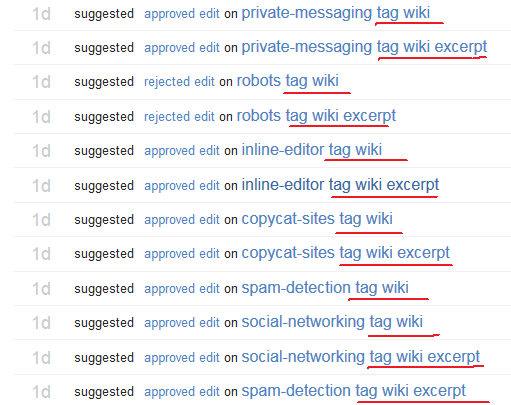 Not the answer you're looking for? Browse other questions tagged bug status-bydesign review suggested-edits tag-wiki .

296
How do suggested edits work?
417
Decision on rejected edits should be displayed as a notification to the editor
536
The current review system encourages fake reviews; some people upvote everything rather than actually fixing problems
8
Suggested edit still not in the queue after 1 hour
4
Review overview shows two suggested edits for a long time, but the review queue is empty
295
How do we encourage edits to obsolete/out of date answers?
37
Can we have tag wiki and wiki excerpt edit reviews in a separate queue to suggested edits?
105
What criteria should we use to determine which review queue indicator a site will have?
226
Improved experience for users with review suspensions