Was taking a look at the 'reputation' tab in my profile page and noticed that when I click the 'post' tab it still shows my reputation points grouped by 'time'.

The 'graph' tab seems to be working fine.

Found this behavior in Stack Overflow and was able to reproduce it here in Meta Exchange also.

It's still sorted by date, though. "Time" just means time within the day. So, if you're earning rep on 3 posts, it will sort all of those votes by the time they came in but if you sort by post it will combine all of the votes for each individual post for that day. Here's an example using my profile:

And here's the sort by time for March 3rd. 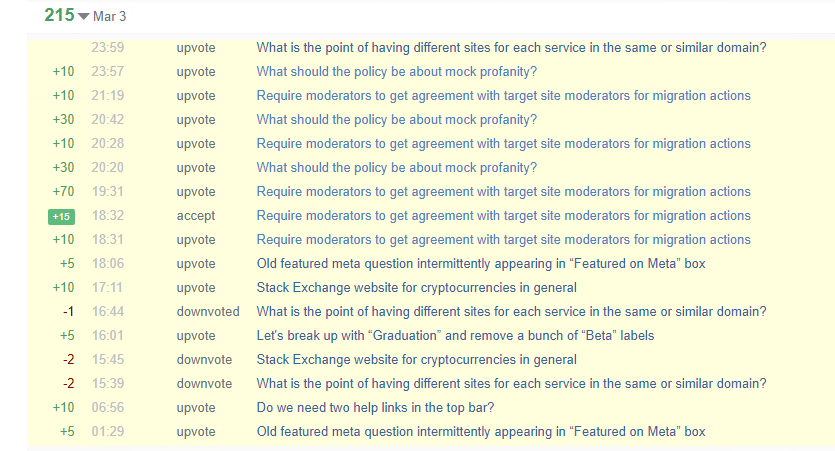 As you can see, while the specific posts do get combined in the second view if the votes are consecutive, they don't get combined if they're interleaved with other posts getting/losing reputation.

In the examples you've posted, there's only one item on the day, so there's no change to be seen. I admit that it's somewhat unclear but I'm pretty sure this is by design.

We sort voting by day as it relates to the reputation cap, so we want to know what reputation was earned on a specific day and then we allow you to sort the reputation changes for that day however you wish.

Not the answer you're looking for? Browse other questions tagged bug reputation profile-page .

17
Bugs with Profile Reputation Graph
534
Recent Reputation History Changes
573
What is serial voting and how does it affect me?
131
Profile Page Makeover, Part 3: the Prototype returns
441
Employee profiles are now marked with a “Staff” indicator