Sorry for asking a question of potentially very short validity. (Though it's been this way for at least one week.)

I've noticed that the ad that sometimes appears in the side column on the right on at least Stack Overflow and Server Fault links to a URL that starts with http://googleads.g.doubleclick.net/pcs/click?. However, the ad that appears here always appears to be an internal ad for Stack Overflow Jobs. Here's a screenshot (look at the URL in the status bar). 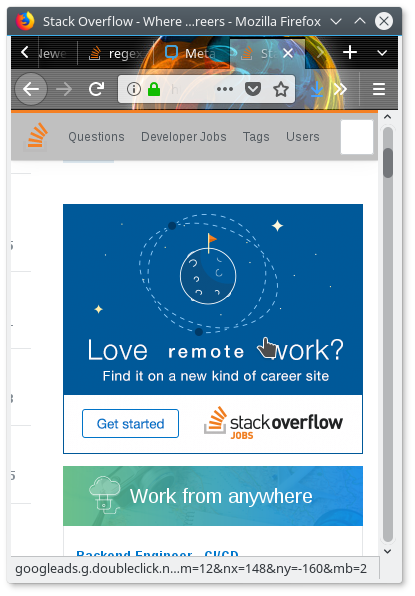 Would it cost Stack Exchange money if I clicked this ad? (And aren't they paying just for showing it?) (Or does Google Ads show internal ads for free, and is there some benefit (e.g., analytics) in using Google Ads even for internal links? (Or is there some other explanation for all this?))

Update: Unless I'm missing something, this is not a duplicate. The suggested page (All sites will be switching Ad Servers on October 1) does not appear to address why they serve ads for their own product on their own site over Google's ad network, which seems to me like it would incur fees.

You're not wrong. We do serve these ads via DoubleClick for Publishers / DFP, just like we do other types of ads. It makes sense to do so, since we get all the same nice infrastructure as we do for the other campaigns, and it's one less system to worry about.

34
All sites will be switching Ad Servers on October 1

287
What is Stack Overflow's business model?
227
We're enabling display ads on select Stack Exchange sites
461
Network-wide HTTPS: It's time
182
Please give us an easy way to flag inappropriate ads
363
Let's take a look at the interaction between staff and the "power users" of the network
2507
Firing mods and forced relicensing: is Stack Exchange still interested in cooperating with the community?
985
Firing Community Managers: Stack Exchange is not interested in cooperating with the community, is it?
8
Why does Stack Exchange use Google ads for links between their own sites?
755
New Feature: Table Support