Image size limit: Why it is set to 2 MB?

From older Meta posts it seem to me that the file size limit was higher in the past, and linked to the limits allowed by imgur.

However, now the limit is 2 MB (or MiB), and imgur allows much more than that ("The maximum file size for non-animated images (think JPG, PNG, etc) is 20MB. PNG files over 5MB will be converted to JPEGs.")

Personally, my workflow to quickly answer question often involve capturing all or parts of my screen content and paste it to the post. However, often 2 MB is not enough to hold a complex (i.e. low compresibility) image of the size of a normal screen, which is very unfortunate, and forces me to save the capture to a file, then open it and save it again with higher compression settings, which is fine but time consuming.

2 MB is a rather small value. Why not to increase it to, let's say 4 MB or 6 MB? That later value correspond more or less to the uncompressed size of a 1920x1080 color image, that is a fairly standard screen size. Of course, compression can be done on the server side, but allowing larger file sizes would make it much easier for the user. I think that we all agree that "copy & paste" are great tools to increase efficiency.

I want to make clear that I'm not asking for bigger images to be allowed in storage, just to allow the upload of larger images, and then do the compression and resizing if needed on the server side as imgur do for all free users. So, I guess it is possible to offload that task to imgur, that already automatically resizes and/or compress large images.

For example, this image, that I captured from my screen and pasted it on the image dialogue was rejected in Stack Exchange: 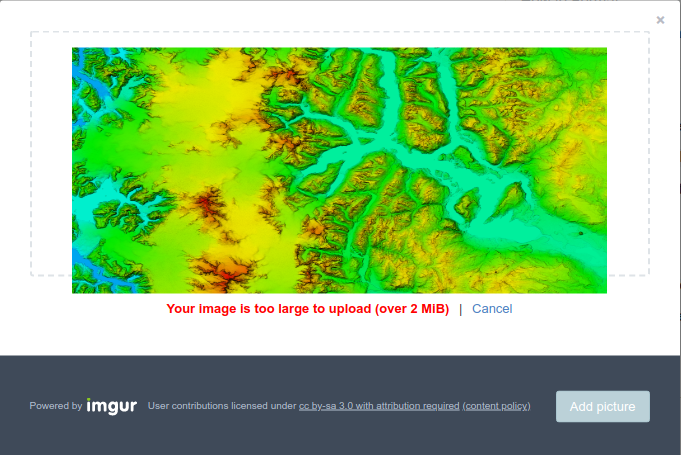 But then I went to imgur and pasted it in the upload dialogue there as a free anonymous user, it got uploaded without any problems and was also automatically compressed. In fact, if you go to the imgur page of the image, and download it you will find that is uses only 345 kB.

As another example, I uploaded to imgur as a free anonymous user an image of 8.6 MB and 4608x3456 pixels in size with no problem, but the version stored on imgur after the standard processing is only 919.8 kB and 3226x2419 pixels in size. So there was automatic resizing and compression.

Wouldn't that same behavior be desirable on Stack Exchange?

The automatic resizing and compressing does already happen in Stack Exchange uploads, the only difference is the arbitrary limit of 2 MB on the original file size. Why is that? Is there a bandwidth limit in the agreement between Stack Exchange and imgur? A CPU time limit?

I am pretty sure the reason is historical limit, that isn't relevant anymore.

Stack Exchange sends the images to imgur via their API, using a special premium account that was made many years ago, back in Jeff days. Back then imgur was still young, and most likely 2mb per image via the API was their soft limit.

As far as I could see, these days the API limit is 10mb per image, so either SE simply never spent time changing it on their side, or the contract they have with imgur (with special pricing) won't allow it, can't know for sure.

As an alternative you can embed the image directly, by hotlinking from a source that supports it like wikicommons. For example the megamap below is 18MB!:

Just be sure to attribute the image. In this case, the souce is: https://commons.wikimedia.org/wiki/Map#/media/File:Claudius_Ptolemy-_The_World.jpg

My apologies that this is more of a comment than a resolution of the issue in the question. But Since it is tagged as a discussion and feature request and my comments will not fit in the comment space I have posted as an answer.

I am a moderator for Woodworking SE and question/answer content often requires images. There is a problem loading images to StackExchange sites in that the size of the files must be less than 2 meg. Most photos these days are larger than that and the user must find a way to reduce the file size. This tends to discourage users from including photos and posts often end up including external links to dropbox or other sites rather than adding the photos. I end up chasing these links down and converting the photos myself to provide meaningful content in the posts that will survive over time. I realize that detail is lost in reducing the size, but 2 meg still allows for adequate information for the images I have reduced (using photshop).

It would be very helpful if the image dialog was able to reduce image sizes itself making it easier for people to post. I have seen this ability on other sites from time to time and would like to request this feature in SE.

Not the answer you're looking for? Browse other questions tagged discussion feature-request images imgur uploader .

-15
Increase the file size limit for animated GIFs (currently 2 MiB)
0
When copy-pasting images from the clipboard, automatically reduce image size to below the 2 MB requirement