I'm in China where all of Google is blocked, including the Google Ajax library.

I use Resource Override (not affiliated!) to override this URL to a local copy of that script, so all Stack Exchange sites worked well for a while.

Some time ago, however, the red banner showed up again. It took me a quarter to realize that there's another version of jQuery loaded from Google:

So I overrode it again.

It would have taken only a few seconds if the failed script was told to me. I propose that whatever failure in loading pages, sending Ajax calls, etc., be displayed in the F12 Developer Console. This will be very helpful.

Second, the majority of Stack Exchange visitors go to Stack Overflow, the majority of which are developers who know and are interested in debugging, especially in this very case where Stack sites only malfunction in known ways. I wouldn't propose the same to Google, because their users are not primarily developers.

This is already possible on the Developer Console itself (at least tested on Chrome).

In addition to the beloved "Console", there's also a "Network" tab that displays most (if not all) the requests and their HTTP status (even for AJAX calls). 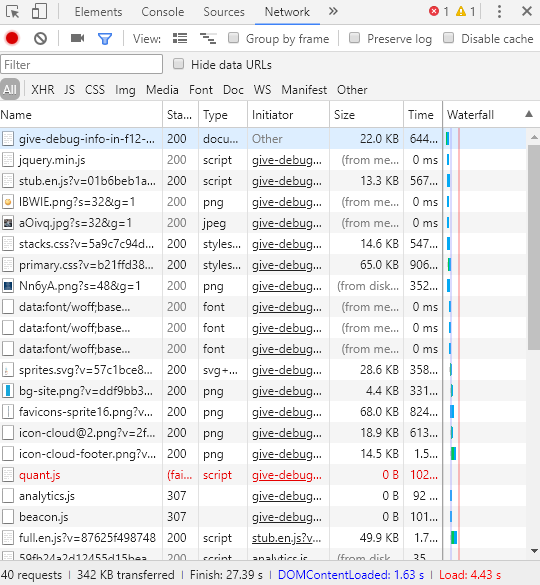 It would be an option that SE hosts the file themselves. If they don't want to leave the (often already loaded) Google CDN files, there are options to load the file from their own server if the Google CDN attempt fails. (See this SO post for example.)

If you want diagnostic information in your developer console, I'm sorry, that is not really the job of SE. If you choose to alter the code and replace it with the wrong one, no diagnostics are going to help.

84
auto-detect the phrase “it doesn't work” and ask user if enough info given
75
Give the Community user a custom Gravatar
111
Can we have a moderator only “flag for community team/developer attention” link on posts?
107
Give Community ♦ a review ban
87
Give new edit reviewers some audits to begin with
203
Add a console to Stack Snippets
180
Please give us an easy way to flag inappropriate ads