This is specifically inspired by a recent post vandalism, where a suggested edit (a good one) was accepted by OP with "Improve edit". The suggested edit (#2) was then edited by OP as vandalism (#3). Attempting to roll back to revision 3 resulted in revision 5 or higher (you can't roll back directly since the content is the exact same) being included in the rollback to revision #3. Now, this is only reproduceable if, and only if, the original edit contains tag edits and the new one contains content edits. See formatting sandbox revision 230-233 or in the next image.

It might be reproduceable if the content edit comes first with a tag improvement, but I haven't checked that. 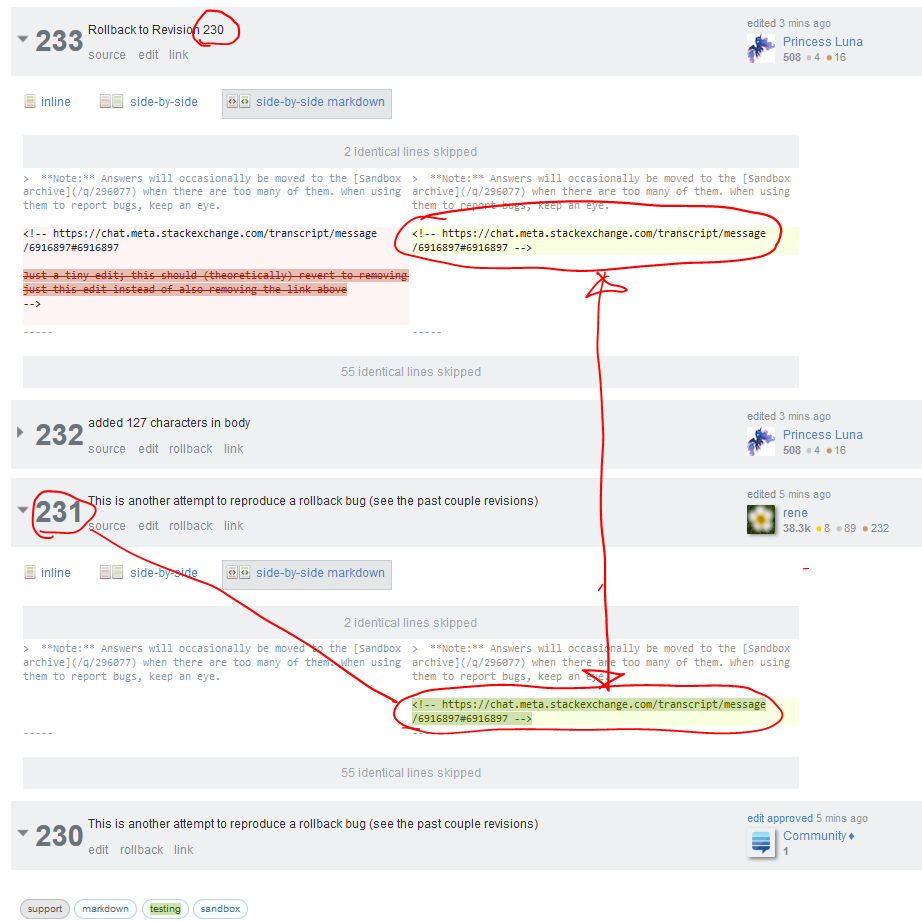 The problem: Revision 230 does not contain the content of the improved edit (here: #231), but on rolling back it it, the content of it is included even though #230 is the rollback target (not #231)

I tried reproducing in answers, but because it only has the answer text I couldn't reproduce it (meaning it appears limited to answers for now)

TL;DR: separate areas of edits where the reviewer accepted the edit with "improve edit" results in both the improvement and original edit being rolled back to when it's just the original edit that's the target.

Why this is a problem

This question was inspired by this exact thing happening on a post that got vandalized. The post had a suggested edit for tag improvements, and OP accepted the edit with "Improve edit". OP then vandalized the content of the post in that edit. Rolling back to the original (good) edit resulted in the bad edit (here, by OP) being dragged with it.

18
The Rollback link doesn't work on deleted posts
292
How do suggested edits work?
163
Do we need a 'reject and improve' button?
35
Please facilitate undoing the harm from bad suggested edits
355
Reject an already-approved suggested edit when rolling it back
145
Improvements to a suggested edit cannot be submitted when the suggestion is approved during editing
70
What should be used in place of “Too Minor?”
295
How do we encourage edits to obsolete/out of date answers?