Can you please make the captcha easier for humans?

Hello, I am human, not a bot. Sometimes it is very hard for me to answer those captcha questions. Can you please use some other kind of question which would not require me to recognize letters?

Sometimes they're a bit tricky, but there's always the "give me another one" refresh button somewhere on the right hand side - I very rarely get more than two unreadable ones in a row.

If you come across any problems with parsing the text/visual option of the CAPTCHA screen, you can reload it.

Or, you can click on the speaker icon to hear a snippet of sound for the audio CAPTCHA option. 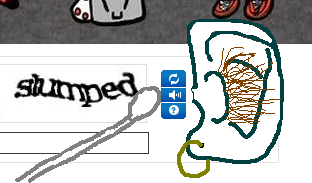 If you fail both options, you are a robot. Why is the turtle on its back?

Some actual data from our daily W3C web logs.

Out of a million plus hits in a given day, here's how many times the page /captcha was served by IIS:

For context, one particular element we serve on a lot (but not all) pages was served up 716,582 times in the same time period.

The data simply doesn't support the argument that the captcha is coming up a lot for people.

I'm having trouble parsing this.

It's difficult to read the letters, but doing a logic problem would be easier? The problem with logic problems (hah) is that you'd need to have a database of them. Lots of them. Or else there'd be enough repeats that a bot could still guess them.

I get the captcha every now and again, too; I also find it annoying. But making the letters hard to read is part of the point -- bots doing OCR will have difficulty with them, while humans (who have much fuzzier logic and are generally better at deriving meaning even from distorted shapes) will be able to make them out.

Are you, or have you ever been, a machine?

Seriously, it used to annoy me a lot until I hit I guess 1000 rep. After that I hardly see it anymore. But it was annoying, not impossible.

There are other approaches to CAPTCHA that are much easier on people than those warped and distorted words. One called Confident CAPTCHA, for example, asks people to identify pictures of various things. It's very secure against bots, but a lot easier for most people to use. There are others that ask people to play a simple game, solve a riddle, draw a shape, etc. Websites should consider those alternatives when they're considering deploying a captcha on their site.

Not the answer you're looking for? Browse other questions tagged feature-request captcha .

4
Unreadable Captcha
-8
New captcha suggestion
119
The reCAPTCHA has become too difficult for humans to solve
-1
Better CAPTCHA to Use on the Site?
1
How to know if captcha character X is uppercase or lowercase

858
Allow an edit to notify downvoters: "I think I've fixed the issue now - please check"
989
Show all of my question/answers to me even if they are deleted
187
Please add the ability to fold blocks of code in questions and answers
331
Distinguish close votes by reason
417
Decision on rejected edits should be displayed as a notification to the editor
289
Let's stop displaying a user's accept rate
198
I am not a robot!
305
Build and strengthen the Stack Exchange community with "crossover questions" between sites
253
Increase close vote weight for gold tag badge holders