It's awesome that we can propose new sites that have the chance to become fully mature stackexchange sites like SO!

Any site has that potential, given enough enthusiast, involvement from the site's members and amount of users it attracts.

One of those sites was Personal Productivity, but it was closed for this reason

This proposal didn't have enough activity during the beta. It was closed 2 months ago.

It makes a perfect sense to close a site that doesn't have enough activity. Burninate it and, if it resurfaces with the same faith put it on the blacklist!

So the only problem was 0.4 questions per day. If those 1379 visitors per day were like me, they were not aware that the site is suffering like that but they got the door slammed in their face.

No, don't do our job - just let us know that the site is about to be closed.

In Personal Productivity's case, there are 6+ years of beta. Closing such a site is not a fate I would've expected.

The current policy on beta site graduation and shutdown is detailed at Graduation, site closure, and a clearer outlook on the health of SE sites.

The second point is indeed what happened. I dug out the final meta post from the data dump below, which explains exactly what the problem was:

We recently opened a call for new moderators to step up and help lead this site, which was met with a few upvotes and a lot of tumbleweeds rolling by. Given the non-existent interest there, we were forced to look more closely at the health of this site and whether this community is suitable to continue functioning moving forward.

The result: We are planning to close this site on March 6th.

So where is this site falling flat?

Those last two bullet points are great cause for concern. Voting as a whole has dropped significantly since the start of the site, approaching something of a stand-still. The overall number of upvotes and unique voters on the site has continued to decline to the point where the pages are becoming flooded with zero-scored posts.

Most of the questions and answers being posted on this site are coming from drive-by users who generally ask one or two questions and don't really do anything else with the site. They don't accumulate any reputation, and don't end up participating in the site further.

But this community is supposed to be a collection of community-curated content. It needs users who are willing to fix mistakes and vote on posts in order to survive and grow, but is lacking the users who are interested in doing those things. Without such commitments, we're not creating a site full of knowledge, but rather creating a database full of text.

Here's what the graphs currently look like (without February included since it hasn't been a full month yet): 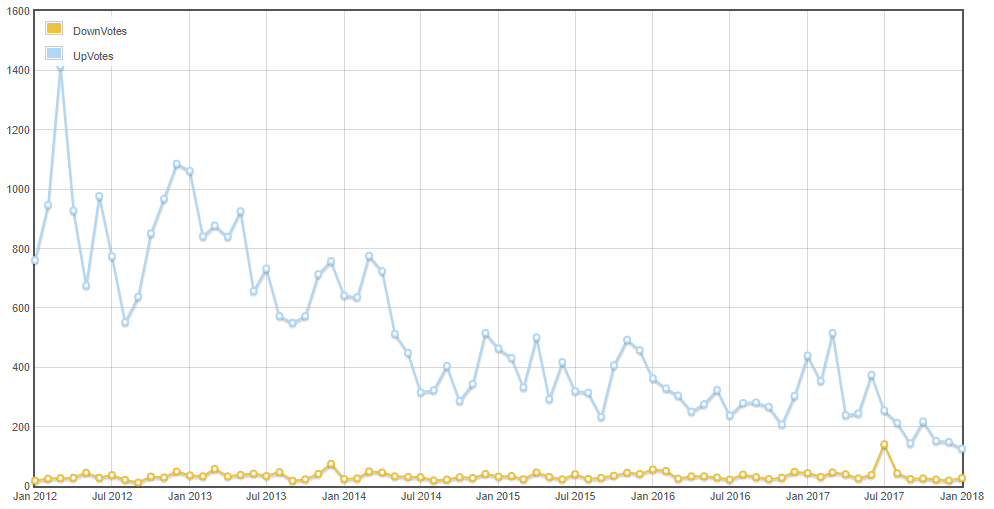 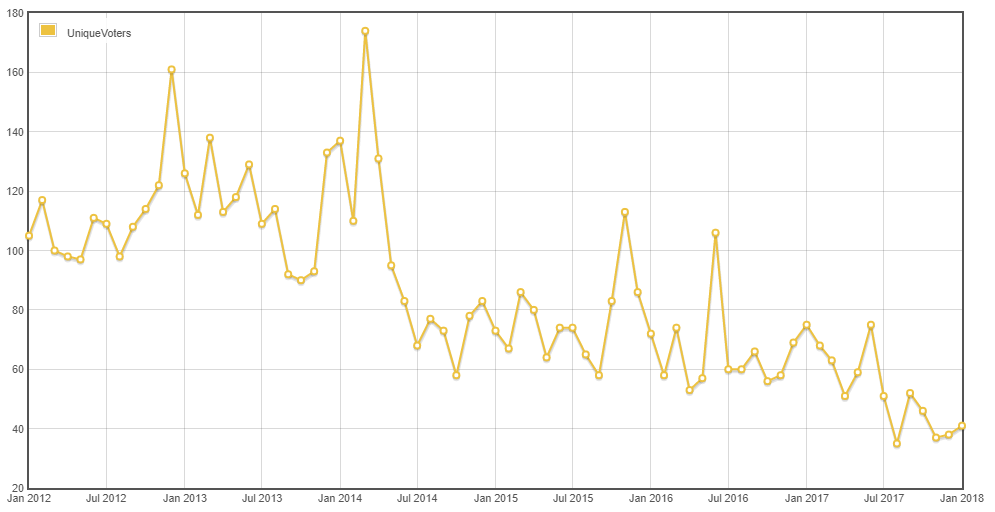 All of this boils down to: it looks like there isn't an actual community behind this site that's interested in seeing it succeed. It is mostly composed of curious users and a few power users who have been keeping the lights on.

Thank you to everyone who has participated on the site over the past years.

I have omitted certain sections of the post for brevity, you can find the full text in the ProductivityMeta folder, in PostsWithDeleted.xml.

Ultimately, I don't think sending an email out would make much difference here. The ideal candidates for moderators are the power users; the dedicated few who visit the site every day and curate. Having to email users who are no longer regular visitors to the site to ask them to step up doesn't seem like a very effective idea... and who's to say these users will be any more committed to the site this time round?

I realise, of course, that it's very disappointing for a site not to succeed... but it's better than leaving an unmaintained, unhealthy site to linger and die slowly, and avoid wasting the efforts of the few users who are left.

The process of closing Personal Productivity was FAR from sudden or without substantial effort or transparency.

We don't generally close sites for lack of question counts or traffic. Just about the only criteria we have to keep a site open is three people willing to step up and say, "yeah, we'll help watch over our site". See Site closure and the health of SE sites.

When the Moderators of Personal Productivity started stepping down to let others take on those roles, we issued multiple calls to find anyone willing to take care of that site. We couldn't find three people to Moderate that site. I don't recall the exact details, but it was a multi-month effort.

That is why the site was finally closed.

People should want to participate in a site not be pushed to do it. Pushing people back to a site they stopped participating in is not any sort of sustainable activity. Sure it might get some people to try to get some activity stats up but that's just gaming the system.

It will probably lead to forced questions we sometimes see in early private betas. Those questions have never helped any site. If a community member of a Stack Exchange site had a problem in the site's area of expertise and doesn't think of the site then some last ditch mail asking for pity questions won't help.

Contrary to what your cited stats indicate Aurora's answer shows that this was by no means a slamming into users' faces. There were both things you wanted, an information and a call for new moderators to keep it running.

Other answers have addressed why and how this site was closed. As they said, it wasn't sudden, but it did require that you be paying attention to meta. If you rely on tools like the newsletter or a question feed to find out about new questions, you might have missed it. More likely, you were aware (through occasional visits) that the site was in trouble but were surprised by the timing.

SE is pretty conservative about the email it sends, but there's precedent for a different mechanism. When a site is holding an election (and you have enough reputation to participate), you get an inbox notification (in the topbar). One could argue that for something as important as electing moderators maybe we only want nominations and votes from the people who show up and see it organically -- and yet we send out a notification, no matter how long you've been away.

Similarly, I think it would be reasonable to send a notification when the date has actually been set -- this site will close in one week; if there's anything you want to keep or try to migrate, go do that now. (Yes, the site content is provided in a data dump, but some people might prefer to save HTML or screen shots of their favorite questions.) We already have a mechanism for sending out a time-based notification from a site; I'll bet SE could apply it to the (rare) site-shutdown events too.

Site closures are necessary sometimes, but they're still sad for the people who helped build them. A notification like this seems like a reasonable balance between "well if you cared you should have seen it" and silence.

If one wants to be part of a site, it's up to that person to follow the site, not the other way around.

More than that: I believe many people will consider such an email noise and even spam. They don't care about the site, and never asked or agreed to get such emails.

Better keep the system as it is now: send minimum amount of emails, and if one wants to be involved, have them visit and see for themselves, not communicate everything via emails.

Not the answer you're looking for? Browse other questions tagged feature-request area51 beta-sites .

402
Graduation, site closure, and a clearer outlook on the health of SE sites
103
Design-Independent Graduation is on for early September!

923
Show all of my question/answers to me even if they are deleted
315
Distinguish close votes by reason
376
Send authors an inbox message if their question is closed
412
Decision on rejected edits should be displayed as a notification to the editor
1176
Don't throw away all votes when a user is deleted
16
Are there any clear and objective criteria when the public beta site will graduate?
391
Add an “I don't understand” option for review audits
402
Graduation, site closure, and a clearer outlook on the health of SE sites
158
Writing.SE clamours for graduation
483
Congratulations to our 29 oldest beta sites - They're now no longer beta!