If a user changed their username before their account is deleted, questions they voted to close show their old username at the time of closure [duplicate]

Imagine a user votes to close a question, and the question gets closed:

Then, "Ivo Robotnik" changes their username:

And then if "Dr. Eggman" deletes their account, the notice changes to the following:

As you can see, even though the first close voter changed their username to "Dr. Eggman", the name displayed after the account is deleted changes to "Ivo Robotnik", their previous name at the time they voted to close.

I came across a closed question on Hinduism Stack Exchange recently. Two out of four users who voted to close the question are no longer members of the site. Their accounts were deleted due to some reasons. But I am sure that their user names were not the ones which are shown on the close vote banner. You can find a user1195 in the comment section. User1195 is one of the users who voted to close. They commented the day before the deletion with another name which is not the name on the banner. Both the deletions happened in past 2 or 3 months.

We know that there is an issue about anonymizing deleted user's name (it's very closely related). That question says the deleted user's name is not anonymized and their name shows up on comments and close vote banners. But my question is somewhat different. The display name on close vote banner is not updated if the user changed their username before their account was deleted. The name displayed is the name at the time they voted to close the question.

Another example is a deleted question where a deleted user is involved. 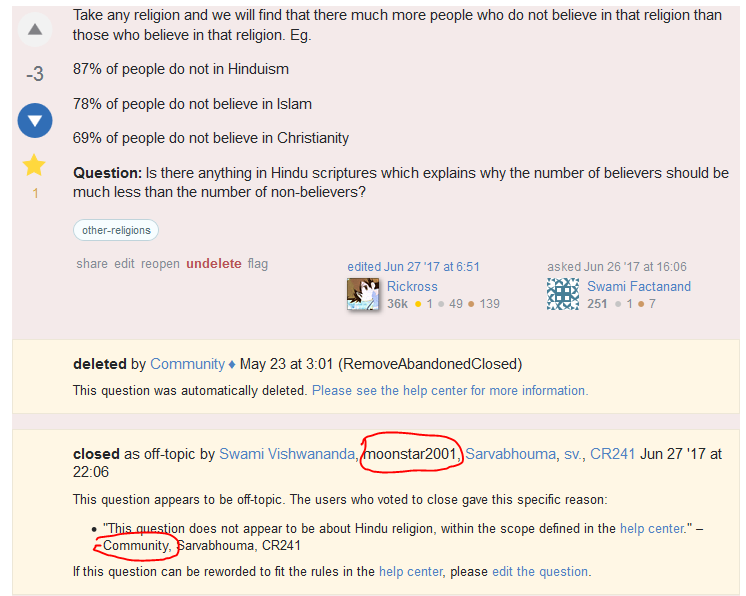 Here, the user named "moonstar2001" later changed their name to "moonstar", but the displayed name in the close notice is "moonstar2001". Other users' display names are updated. So, I believe that the problem occurs only with deleted users.

83
Further anonymize deleted accounts by changing the username in close/delete notices
11
Why are some usernames on comments not a link to user profiles?
13
Cannot login to chat.meta.stackexchange.com; server error when trying to access chat homepage
6
Parent profile on chat is not updated if the account is deleted

14
Migrating questions causes too much visual noise
203
More descriptive "User was removed" explanation
289
Let's stop displaying a user's accept rate
83
Further anonymize deleted accounts by changing the username in close/delete notices
183
A question should not be deleted by the user deletion algorithm if it has upvoted answers
186
Can we clarify to the OP that their question is not yet closed and the duplicates are only suggestions?
275
Make moderator messages anonymous
580
We're switching to CommonMark