Fonts and the new Q&A theming

When we first announced the plan for our new theming (see post for the gory details) we hadn't fully thought through the implications around fonts. The community kindly pointed out this failure in planning via the answer entitled "Can we at least select our fonts". Special thanks to Adám, Monica, and several other community members who very gently pointed out the oversight and compiled the issues to consider.

So, we went back and re-evaluated our need to keep a more manageable font stack while keeping those issues in mind. In the end, we realized that our current approach (the one you see on almost every site today) works great. So, we will stick with it.

Themes can specify what elements use serif, sans-serif, or monospace fonts. We believe this approach continues to provide the necessary character-set coverage and a cohesive look while meeting the content needs of the various sites.

Our Stack Overflow font stack is as follows:

As mentioned, for most sites this means no change. However, 15 sites use a custom font not included in the Stack Overflow font stack. Even these sites will see a very small difference. A few sites, will see a bigger change since they use a funky little font called for body or navigation (rare.)

Sites that have an alternate font stack

Some sites have an alternate font stack and assume/hope you have the font on your machine. The reality is that what people see depends on what is installed on the device. Switching all sites to our Stack Overflow standard font stack (see above) will increase the consistency.

Sites impacted by this change because they use a non-Stack Overflow font stack are:

Feel free to post an answer below to point out any significant issues with this approach or concerns that you feel aren't taken into consideration. We will consider future improvements that address any existing content needs. For now we will move forward with this plan as we update individual sites' themes; the first of which will be up for review and a round of community feedback here on Meta Stack Exchange soon.

What about LaTeX integration?

On sites that have heavy use of LaTeX/MathJax for mathematical notation, the body font is generally chosen such that it will harmonize correctly with the mathematics. This is quite important, and if you get it wrong, it can look ugly as hell:

Squint and see if you can pick out which bits are maths. Hint: you can. Other hint: you shouldn't be able to.

Now, I'm not that fussed about which font gets chosen to do the job, and I appreciate that the variability in the math renderer provided by MathJax means that it's a hard problem indeed, but I'm not clear on what's meant to happen on this front from the current announcement, so since we're on a matter-settling mood: what fonts will be used for sites (maths, physics, chemistry, cs, tcs, &c) that have a heavy use of displayed mathematics?

If it's the current font stack that's live right now on Stack Overflow then the result is OK (though not completely brilliant), 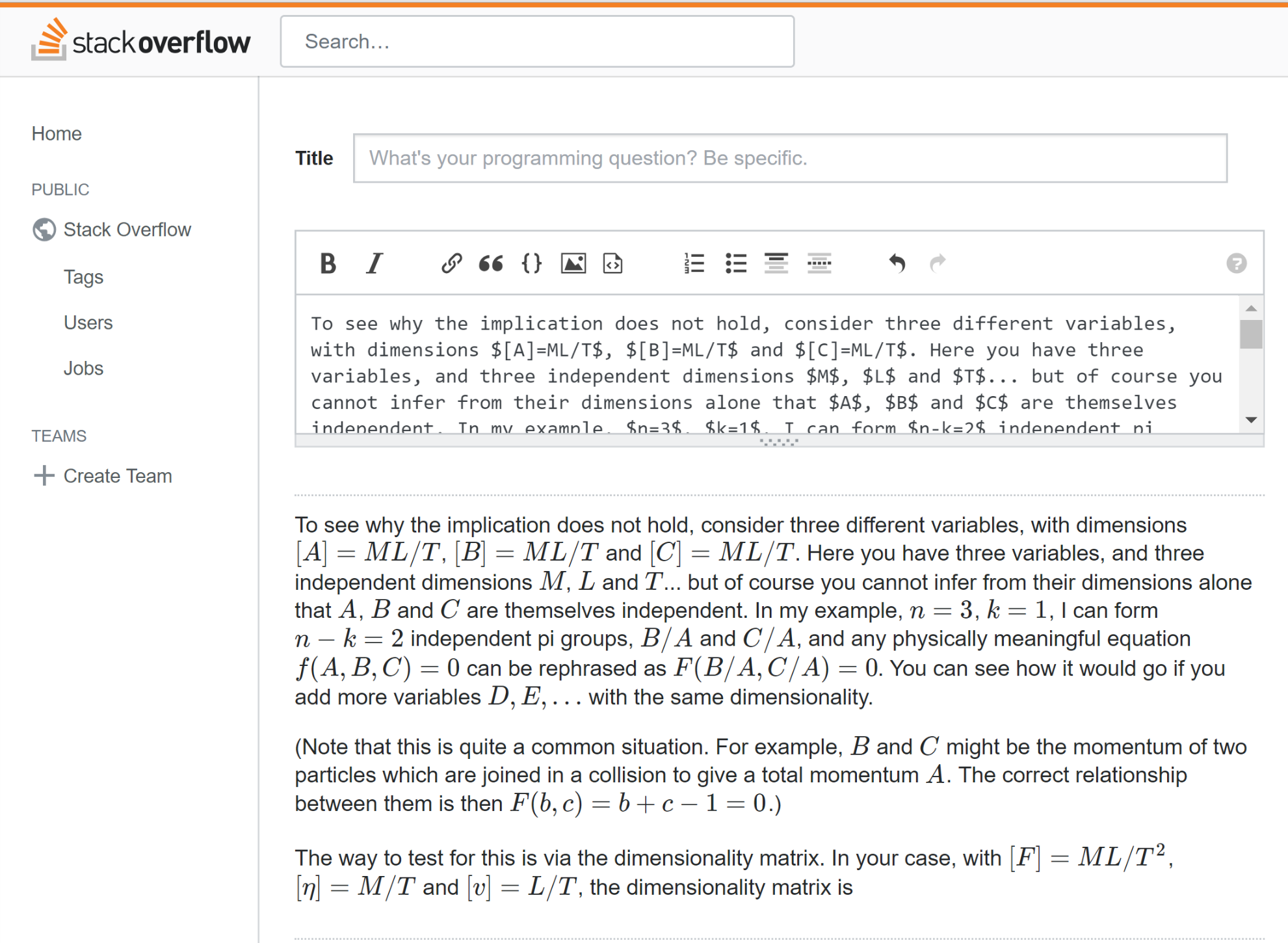 If the current candidate is the Open Sans choice that's currently live on CS, then again, it's just about OK, but I'm not a huge fan either: 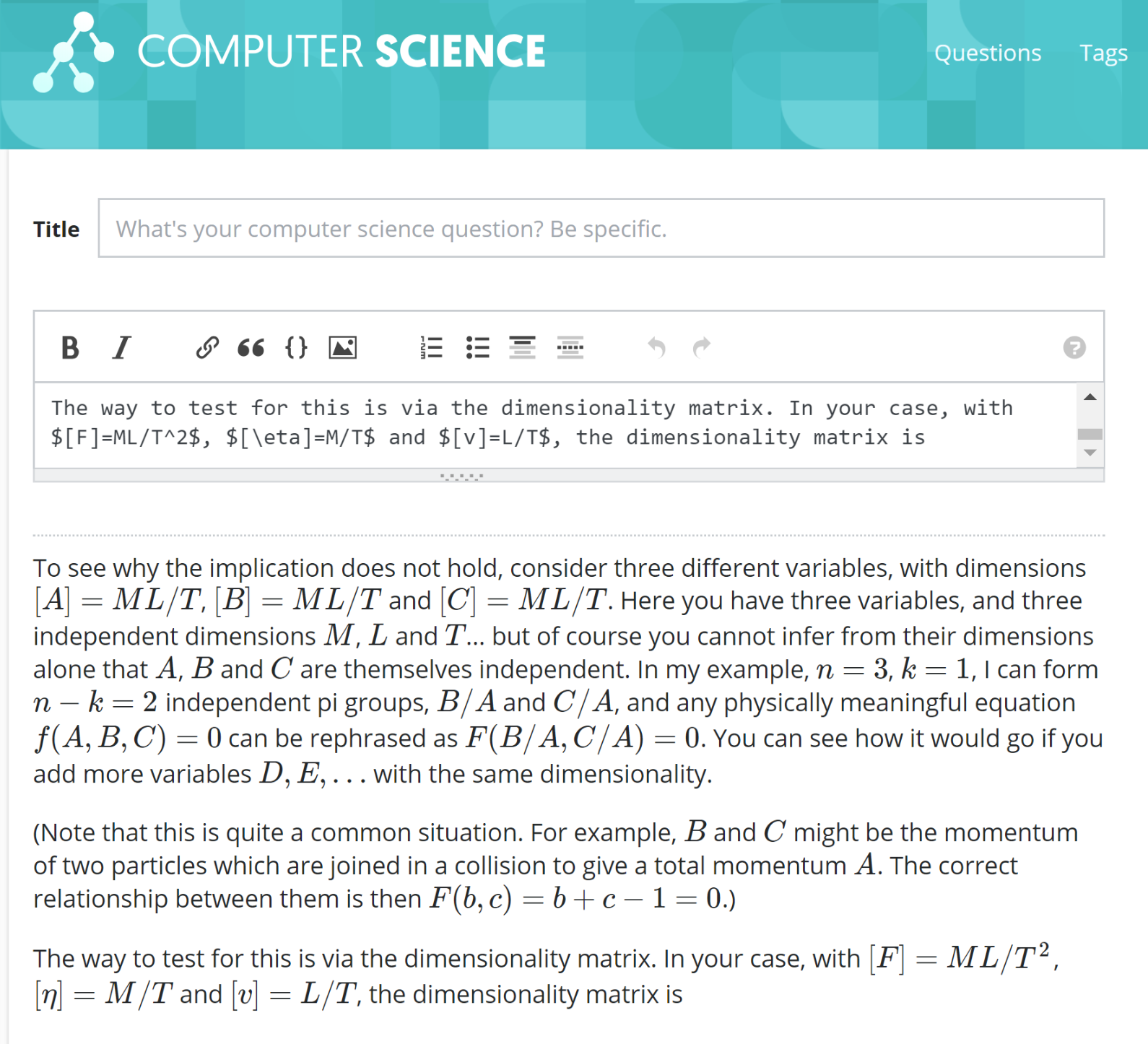 To my mind, the best achiever with respect to that integration (on the up-to-2017 stack) is the chemistry site, but I don't see Georgia anywhere on the plans you've sketched out.

Anyways, I'll stop rambling and just ask straight up: what are the plans for the font choice on sites with heavy maths use?

I'm only speaking for myself, but I wouldn't mind if the font stack on Christianity.SE changed. Lusitana is not great, the bold is very muddy looking, and is especially poorly hinted in headings:

Probably a more generic font stack would be fine. But maybe this is something to discuss on the C.SE meta.

Also, if the implication is that the rest of the sites will stay the same, that's quite sad for Biblical Hermeneutics in particular. Don't forget we've been asking for over five years. It would be a huge shame to leave the current font stack when the rest of the theming is getting an overhaul. It seems a little premature to give the post the status-completed tag when the sites requesting alternate fonts are left with the generic stacks. :)

On Ask Ubuntu the bar above the “top bar” which links to Community, Juju and suchlike uses the Ubuntu font. This is the same across all the other (non Stack Exchange) sites which have this bar.

Will the font of the bar change (and not be consistent across the Ubuntu network), stay the same (and complicate the font stack) or be removed (possibly breaking workflows and reducing Ubuntu integration)?

149
Ch-ch-ch-changes: Left nav, responsive design, & themes
158
We are switching to system fonts on May 10, 2021
79
What does constructive criticism of a design change look like?
77
Left nav, responsive design, and theming next steps
43
What’s the redesigning campaign – in a nutshell?
4
Why do stack sites use different fonts?
7
Bring back site-specific fonts to the new design
-225
Live: Left nav, new theming and responsiveness

1848
Could we please be a bit nicer to new users?
2794
A Terms of Service update restricting companies that scrape your profile information without your permission
9
Why do some parts of the standard theme use different fonts than the rest of the site?
2515
Firing mods and forced relicensing: is Stack Exchange still interested in cooperating with the community?
555
The company’s commitment to rebuilding the relationship with you, our community
583
We're switching to CommonMark
368
Stack Overflow for Teams is now free for up to 50 users, forever
158
We are switching to system fonts on May 10, 2021